Hello there, Sunday’s come around again rather fast. We’re in the middle of another bank holiday weekend here in Gibraltar as its Worker’s Memorial Day tomorrow. We’re at the time of year when we have few 5 day weeks at school. It’s nice in a way but a bit ‘bitty’ in others as it’s hard to settle into a proper routine.

Last Sunday (Easter Sunday) we left our lovely rental house in Padstow in Cornwall and headed to Exeter airport to fly home to Gibraltar. We flew to Malaga and then drove home from there. This was my last glimpse of Blighty for a while as we headed south over the English coast.

And back at home in Gibraltar we were greeted with grey and wet weather, but then we got this lovely sunset! It’s good to be home!

The Little Postcards returned to school after Easter on Tuesday morning and I found myself down by the side of the harbour in Gibraltar and was mesmerized by the boats. This huge tanker was coming into port with the help of a little tug boat. The tugs are so powerful despite being so small!

This is a very impressive cruise ship which came in one morning with the golden morning sun shining on it. I watched it leave again later in the day with the sails unfurled. It was quite a sight.

On Thursday evening I had a lovely catch up with friends in Queensway Quay. There’s no better tonic than a a good old giggle, and boy did we laugh. Just brilliant. 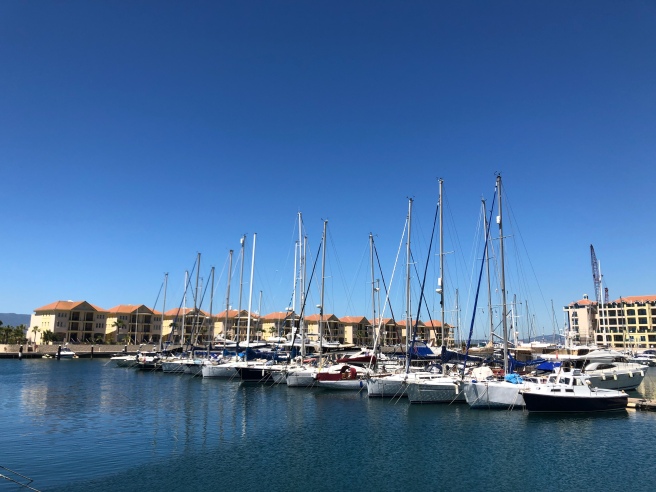 And just a few hours later I was back. This time with a friend from home (Manchester) who I haven’t seen for over 10 years, who happened to visit Gibraltar on a day trip from a holiday in Benalmadena. Another lovely catch-up. I’ve been very lucky this week!

Yesterday we took a drive along the coast from Gib to Marbella and found ourselves in the midst of a ladybird bloom (if that’s the correct terminology). There were loads about and we found many of them struggling in a fountain. We fished about 50 out and left them to dry their wings out in the sunshine.

Where we were was also in the midst of the most beautiful bougainvillea. It was perfectly set off against the deep blue sky.

And that is where this week’s Sunday Sevens (or perhaps that should be Sunday Eights) comes to an end. I hope you’ve had a good week, and that the coming 7 days are kind to you.

I’m linking with Natalie from Threads and Bobbins for this weekly blog series.