During the summer of 2017 we did a bit of travelling as a family and at long last I have got round to writing some blog posts about it and downloading a few of the many photos on my camera. Last week I published my Postcard from Rome, today here’s my Postcard from the Vatican. 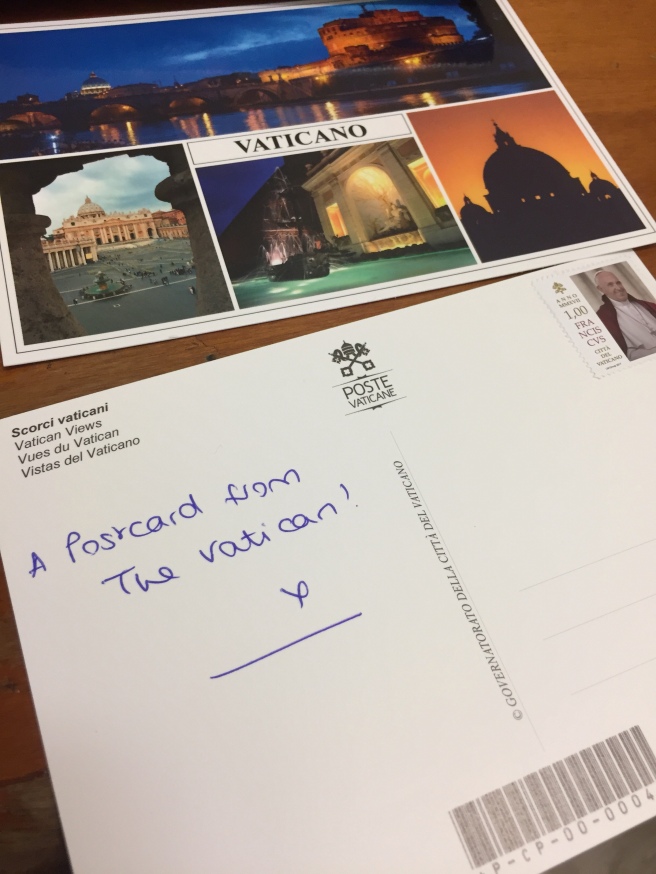 Before setting off on our holiday to Rome last summer, Mr Postcard rather sensibly booked a couple of guided tours, one was to the Vatican City. Included in the price was entry to the Vatican Museum, Sistine Chapel and St Peter’s Basilica as well as the tour. We met our guide, Maria, on the steps outside the museum where we were fast-tracked through the crowds.

First stop after the ticket hall was a lovely viewing area which gave us a great position to look out across the Vatican gardens to the dome of St Peter’s Basilica. It was here that our lovely guide took us through many of the things which we were about to see and experience. Our tour was specifically tailored towards a family with young children and Maria showed photographs of various art works and sights we were soon to encounter.

It was here that the first stand out moment of the day happened…. one of the Little Postcards amazed us with his knowledge of Michelangelo and the Sistine Chapel. It turned out that he’d done work on it a couple of years before in school and he’d remembered it. Well I never.

After passing through the first part of the Vatican Museum, past ancient Egyption relics and other items from the ancient world, we found ourselves out in a large courtyard garden. The centre of it was dominated by this sculpture. The Sphere within a Sphere was created by Arnaldo Pomodoro and is one of several similar orbs dotted around the world. This one is exactly the same size as the one on the very top of St Peter’s Basilica (see photo above) so it really puts into perspective the scale of the church.

One of the benefits of being on the tour meant that Maria was able to invite the Little Postcards across the chain which roped off the sculpture and got them to help her push the sculpture round so that we could get a 360 degree view of it without moving ourselves. It was fun for the children to get ‘hands-on’ with this piece of art. 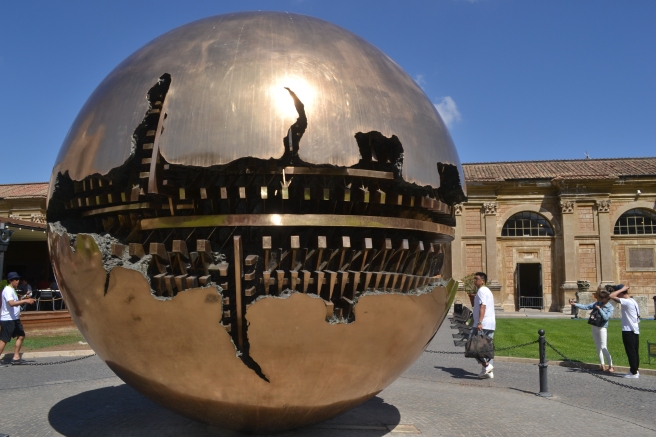 At this stage I must point out that I am not attempting to write a guide book about the Vatican – that would be impossible in a blog post plus I’m sure that many people far more qualified that I am, have already done just that. I just wanted to share a flavour of some of the things we enjoyed on our trip.

In the following photo you can see, not only the sphere at the top St Peter’s Basilica again (top right), but also evidence of the extensive restoration work which was being carried out on the historic buildings.

Some sections had already been cleaned up, while other parts were still in progress. 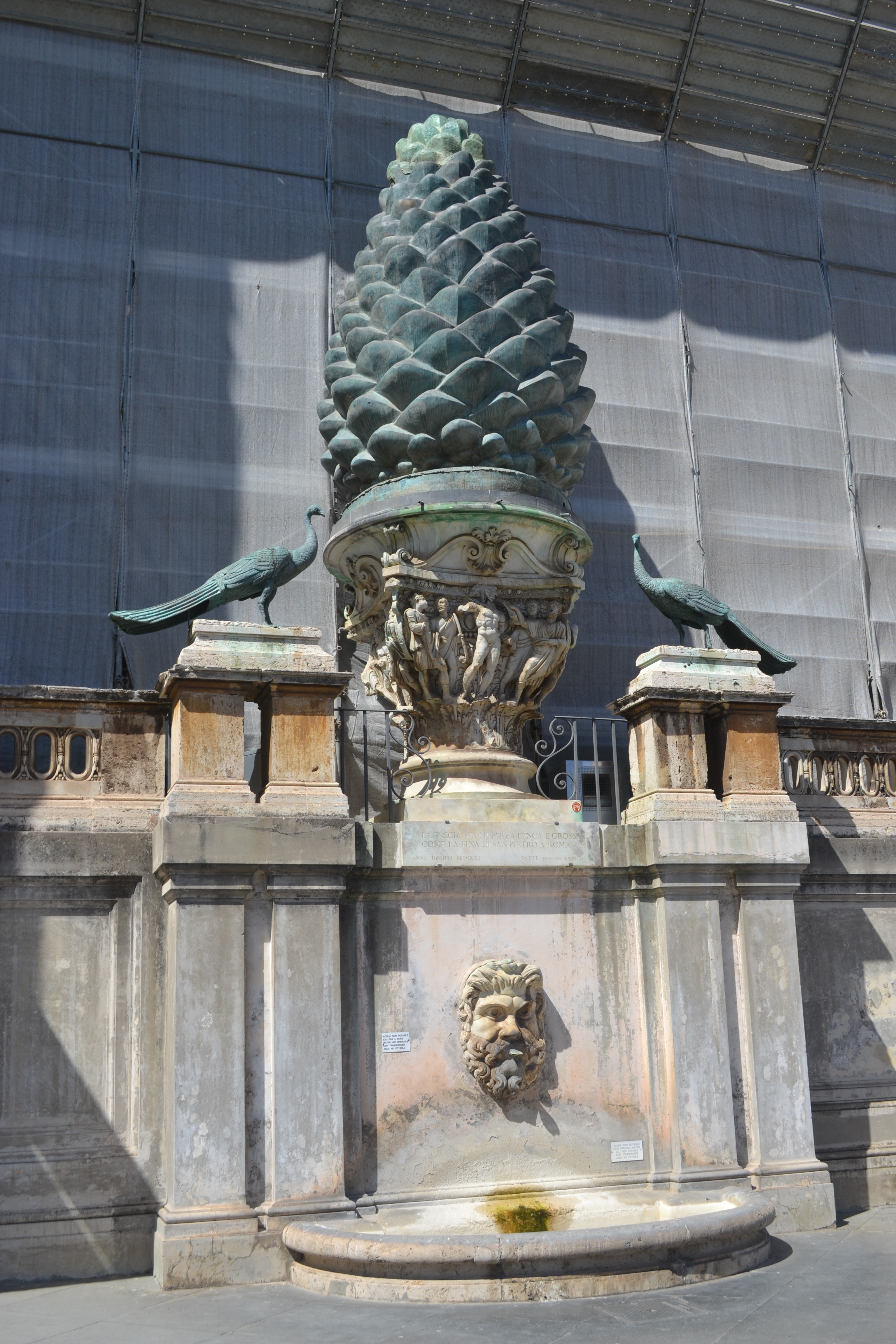 The most impressive aspect of the Vatican City was the beautiful art work which was everywhere. Every wall, every ceiling was covered in the most exquisite work.

And the colours of the paints used are stunning considering the ages of some of these pieces of work.

Now that is what I call a ceiling!

Along the walls of this amazing corridor (the likes of which I have never seen before in my life) was a series of maps. The unusual thing about these maps is that many of them were drawn upside down so that they were from the perspective of the Pope in Rome looking down towards the south. They were also created in the days long, long before satellite images so they were guestimated. Our guide, Maria told us that amazingly in many cases they are pretty accurate despite the lack of geographical knowledge of the time. 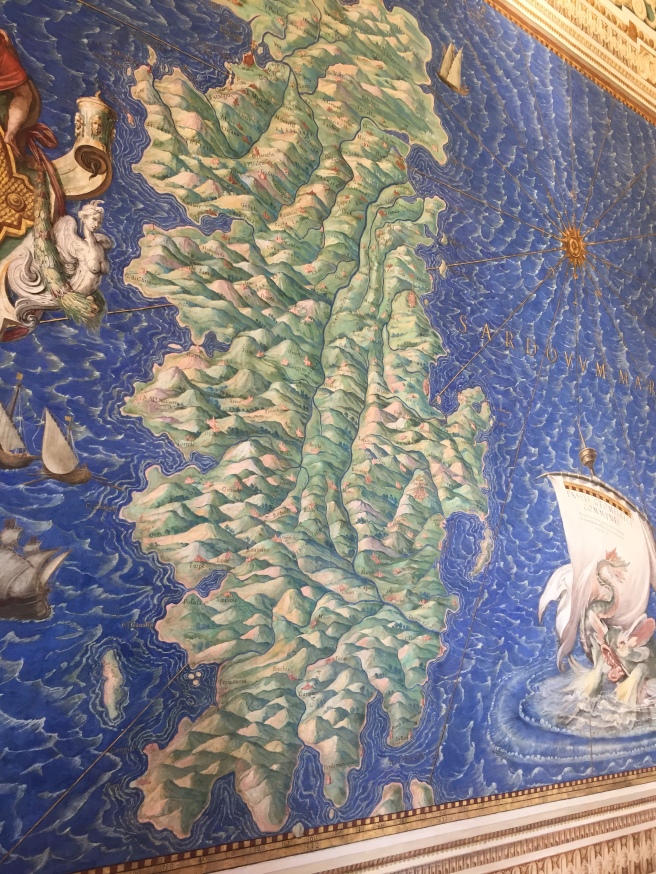 Of course, no old map is complete without a sea monster. 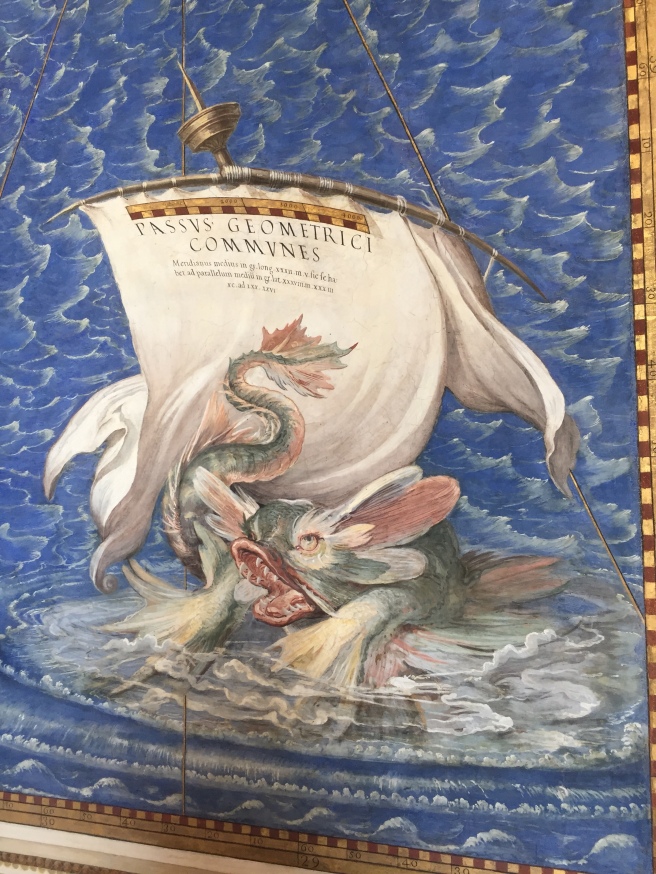 As a born and bred Mancunian, I have an affinity for bees (they were used in the coat of arms of the city to signify the industriousness of the workers during the Industrial Revolution and came to prominence again last year as a sign of solidarity following the terrorist attack in Manchester). As I walked along this elaborately decorated corridor, I found myself spotting more and more bees on all of these maps, both in the maps and on the ‘frames’. 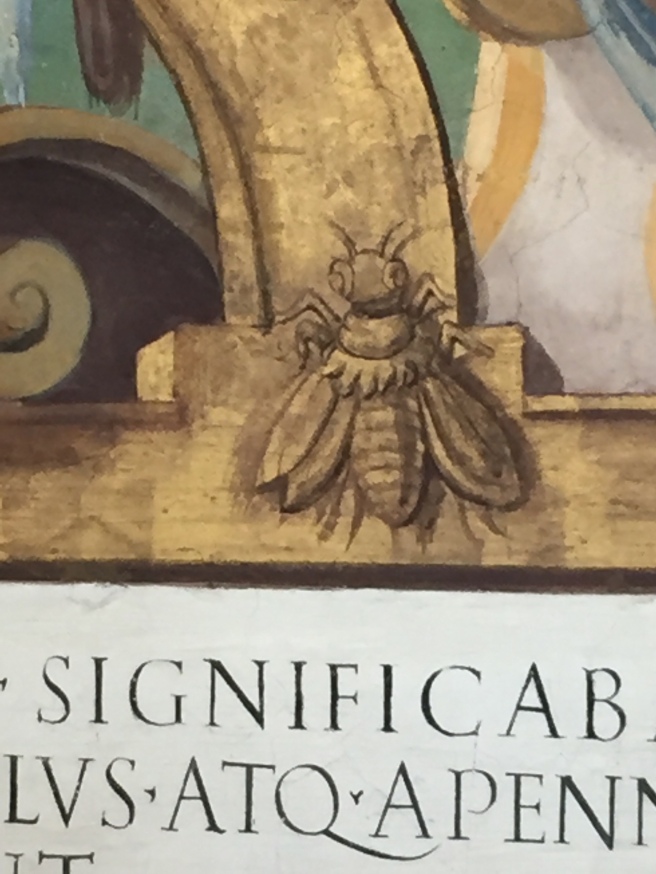 I have done a bit of research (by no means comprehensive)  and it turns out that Pope Urban VIII came from the Barberini family and their coat of arms featured three bees, you can read about it here. You can also find other explanations for the existence of so many bees in the Vatican here. When you look at the maps on the walls of this corridor there seems to be a significance to the bees and where they are placed as if they are marking out churches or cathedrals.

If you can shed any light onto why there are so many bees buzzing about the Vatican, I’d love to hear from you! (I wish I’d asked more questions at the time!)

After this beautiful bee-filled corridor, lay the Sistine Chapel. Photographs are not allowed to be taken in there (although many people did) nor are you allowed to speak in there (although many people did). Therefore I have nothing to show you from in there. All I can say is that it was beautiful, indescribably detailed and mind boggling at how Michelangelo could have completed such an amazing peace of work. (You can see it for yourself on the Vatican website). It was also easy to see that on occasions when it is quiet and calm, that it could be an incredibly spiritual place. Sadly for us, it was more like a cattle market, I was shocked at so many peoples’ lack of respect for such an important religious site (despite the best efforts of the Vatican staff). What a shame.

Next up was the final part of our tour.  At this point, our tour guide left us briefly and came back bearing gifts for our boys. Rather aptly it was a postcard for each of them to remind them of their time a the Vatican. We thought it was a lovely gesture. Thank you Maria, if you see this!

The final stop was St Peter’s Basilica itself. How’s this for an impressive porch?

The Basilica was just mind blowing in it’s grandeur. Every surface was decorated. 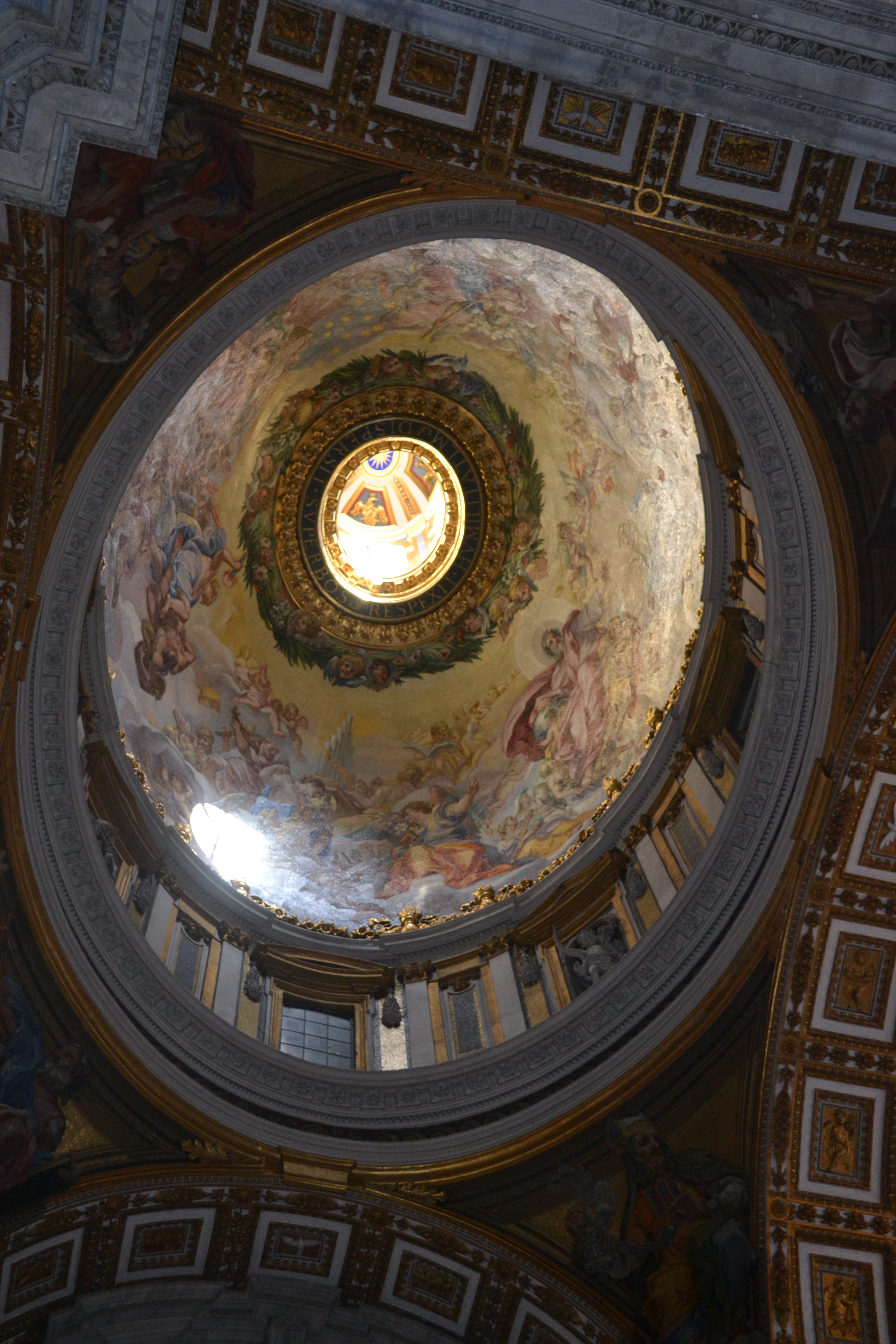 The secret as to why these works of art have stood the test of time is that unlike in the Sistene Chapel, they aren’t paintings. They are made up of millions of tiny mosaic tiles. You may be able to make the tiles out in the photo below: 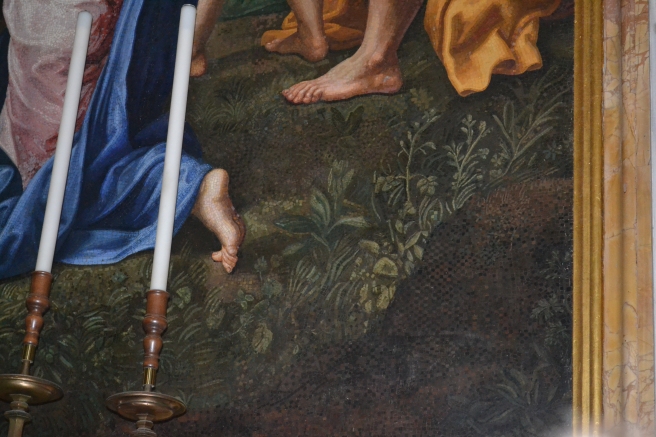 Everything here was on such a grand scale, the like of which I have never seen before. It was a beautiful building, if rather busy. 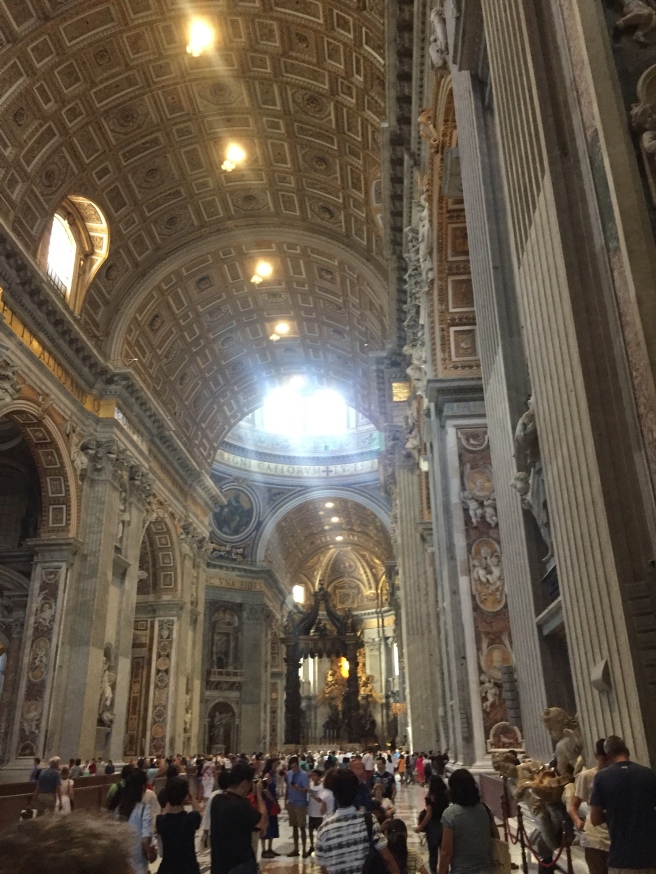 It was on the steps outside the Basilica that we said our goodbyes to our guide for the morning. Enlisting the help of a guide was a price definitely worth paying, especially with young children. They have a relatively short attention span (as do I to be fair) and were able to ask Maria questions that we wouldn’t have been able to answer. It also gave us the chance to learn so much more about our surroundings as, with the best will in the world, you cannot stand and read signs and notices next to exhibits when you are being pulled off in all directions to look at something else by smaller people. I would highly recommend the use of a guide if you are planning a visit yourself.

From the front steps of the Basilica, we were able to gaze up to the Pope’s balcony. I’m not a Catholic, but it was quite surreal to find myself in a place which is so well known around the world. There was a definite sense of reverence and peace in spite of the hoards of tourists. 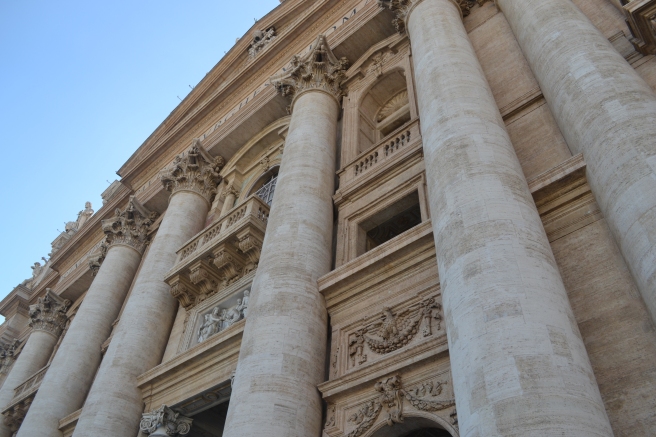 It was upon leaving St Peter’s Basilica that we got our first full glimpse of the famous Swiss Guards. We did spy them at a distance while we were inside the complex but this time we got to see them in all their multicoloured glory. 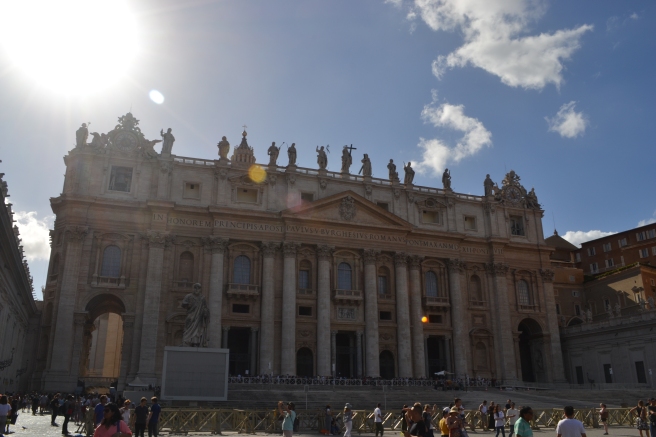 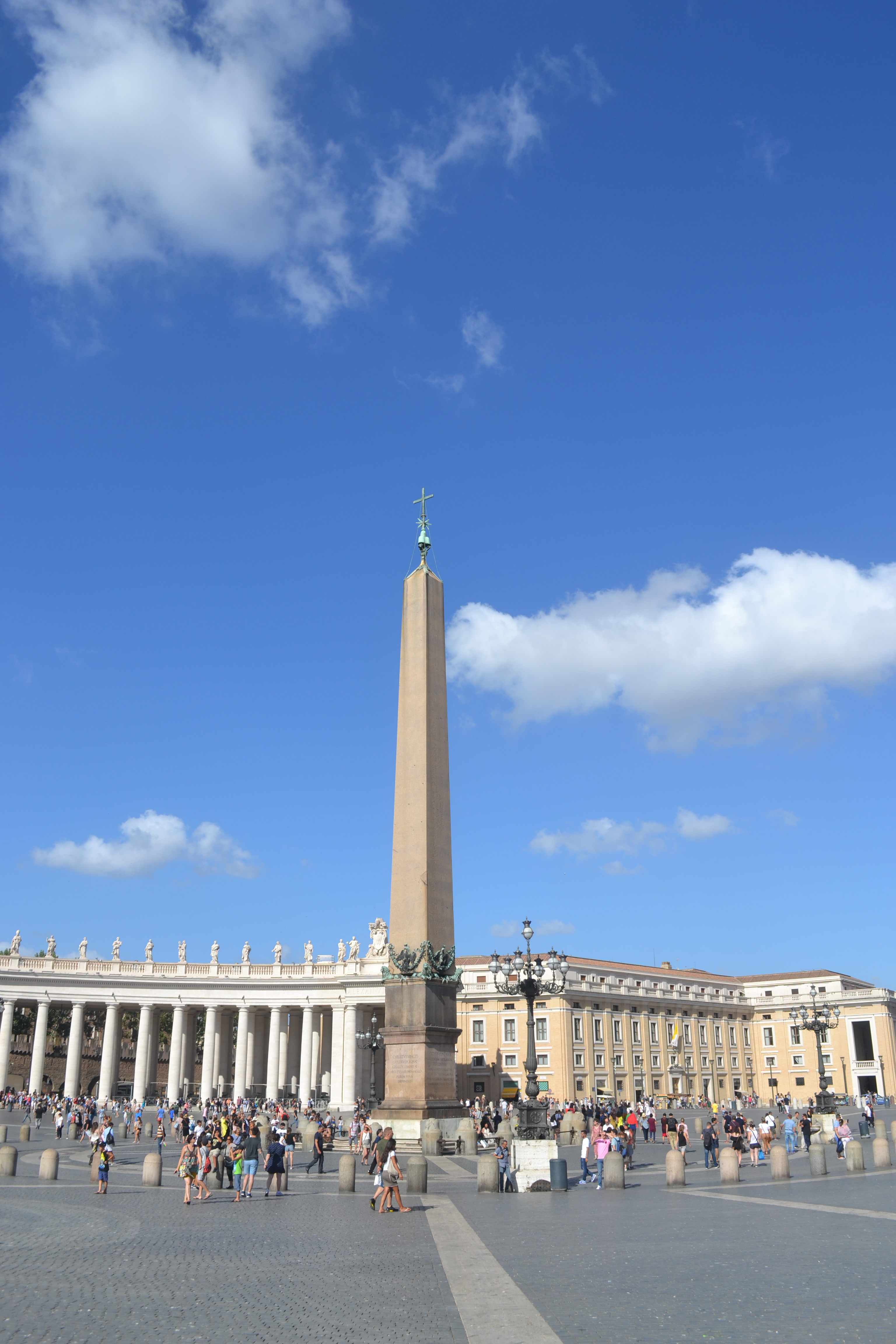 I was blown away with the beauty of the Vatican City. I didn’t really know what to expect, of course I had seen bits on telly and in books but to actually experience it for real was another thing altogether. One thing’s for sure, I will never forget the day we went to look around the Vatican.

16 thoughts on “A Postcard from the Vatican”