Welcome to the 100th Postcard from Gibraltar Sunday Sevens! I can’t quite believe this little weekly Sunday post has reached such a big milestone, and it couldn’t have landed on a more appropriate day than Gibraltar National Day could it? What’s more, this isn’t any ordinary Gibraltar National Day, it’s the 50th Anniversary of the Referendum in 1967 in which almost 100% of the Gibraltarian population voted to remain British. (I didn’t plan this by the way, I’m not that clever, it’s just a happy coincidence).

End of the party…

Bearing in mind this is such a milestone, you would have thought I would have packed it full of gorgeous photos wouldn’t you? Sadly, this week hasn’t been the most photogenic one for me! I begin this post with the last photo from my previous post taken in the early hours of Monday morning (thankfully it was a Bank Holiday here in Gibraltar!).

This year’s Gibraltar Music Festival (known as MTV Presents Gibraltar Calling) came to a climax in the early hours of Monday morning. I took this photo as we were leaving in the middle of Fat Boy Slim’s set (we were being sort of responsible and getting Eldest back home before he or we turned into a pumpkin). For more on the festival, you can find yesterday’s post all about it here.

Things got back to normal again on Tuesday, children went back to school, and a bit of a routine developed again. This long summer break has been lovely but it is nice to have some structure back in our lives again after so long without it! I spotted this cruise ship coming into Gibraltar on Tuesday morning as the Little Postcards were getting ready to head out to school. The tourists on board didn’t get the best of Gibraltar’s weather that day sadly.

We had a couple of nice sunsets midweek, I was sitting out on the balcony after dinner and found myself gazing off into the distance in a world of my own when I suddenly realised the sky was looking pretty. I hadn’t even noticed the sun was setting until the last moment. I grabbed my camera quickly before the sun slipped down behind the hills. 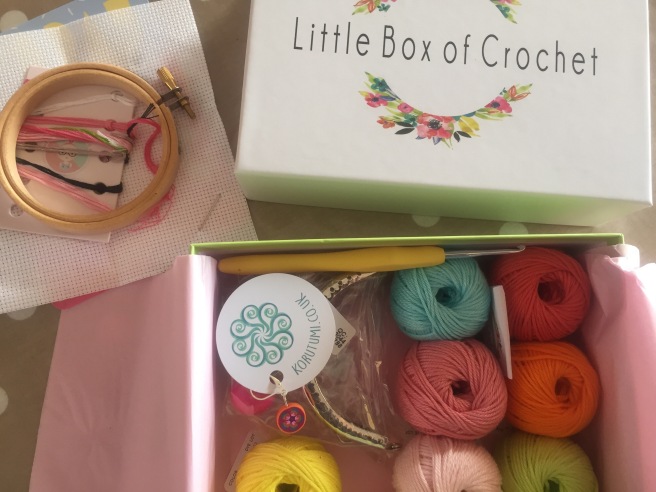 Oh I do love it when I get my monthly subscription from Little Box of Crochet. This lovely little box contained not just a crochet kit, but a cross stitch kit too curtesy of the Geeky Stitching Club! Oh dear, looks like my To-make List is getting longer and longer… 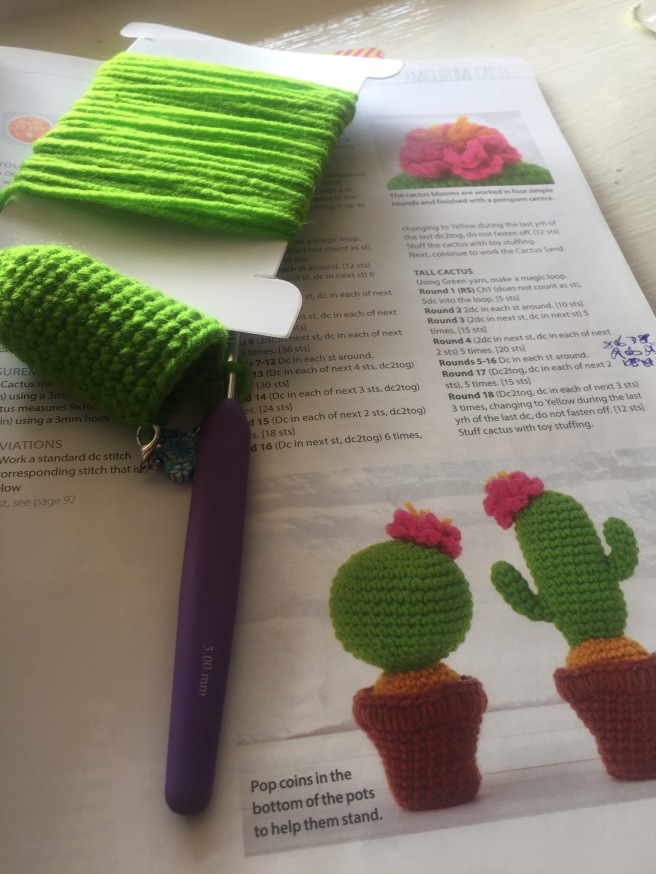 Talking of crochet, I’ve kind of lost my crochet mojo this week. After over 60 days of Crochet during my Summer Craft Challenge, I lost my momentum this week. I’ve only picked up my hook once. I’m hoping this little cactus kit from Simply Crochet Magazine will work its magic and get me back into my rhythm.


A hole with personality 😉 Please tell me I’m not going mad and this hole has a face… it caught my eye as I walked past and I had to go back and look at it again. From a different angle it looks nothing like a face but straight on it has a pair of shades, a nose and a mouth!!

It’s on a wall close to The Mount on Europa Road if you fancy having a look yourself. I reckon he has a look of Elvis don’t you?!

All set for National Day

Gibraltar is resplendent in red and white all ready for this weekend’s celebrations. On Friday I took a walk into town for the first time in ages and ages and got to see all the decorations up close rather than from a car window. Gibraltar really does go to town each September and this year more than most.

Last night I was lucky enough to return to Victoria Stadium, the scene of the first of this week’s photos for another musical concert. This one was by the Royal Philharmonic Orchestra. It was amazing. Titled ‘A celebration of the 50th Anniversary of the 1967 Referendum’ it had the feel of Last Night at the Proms. There was a mix of well known classical pieces such as Pomp & Circumstance and Nimrod from the Enigma Variations and movie soundtracks including Star Wars and Harry Potter.

In addition to the orchestra, we were entertained by the Gibraltar Regimental Band and a local choir. The solo singers were amazing too – they performed a few opera pieces and rousing renditions of Rule Brittania, Jerusalem etc. The female soloist, Laura Wright is a regular at major sporting events singing anthems, the male soloist is perhaps one of the best known opera singers in Britain today; Wynne Evans of the Go Compare adverts. What an amazing night and wonderful atmosphere, and a world away from what we experienced a week before. At just £5 for a ticket it was a fab opportunity to hear some first class musicians.

And that brings this week’s Sunday Sevens to a close. (I know it should be seven photos from the past seven days and not nine, but it’s a special edition!)﻿

I’m linking with Natalie at Threads & Bobbins for this post, as Sunday Sevens was  first created by her. Thanks Natalie for such a great idea – who would have thought I’d get to 100!