This is the first time we’ve ever been to experience the swim. We’ve watched Facebook photos pour in of friends and families we know taking part. Watching them brave the nippy December sea from the comfort of an armchair, mince pie in hand. This year though, we decided (or should that be I decided) we should be armchair spectators no more.

The beach car park was packed by the time we arrived and we ran the gauntlet with some rather maverick parking practices. With a bit of help from my Dad (thanks Dad) I was able to park up and we were ready to head to the sand.

There were already hundreds of folk in high spirits gathered at the southern end of the beach by the time we rocked up.

At first glance at the photos you may be forgiven for thinking it was an ordinary day at the beach, but notice the lack of normal beach paraphernalia like parasols and deck chairs and the large number of Santa suits and antlers…

There was even a herd (is that the correct term?) of polar bears… or maybe they were pandas… 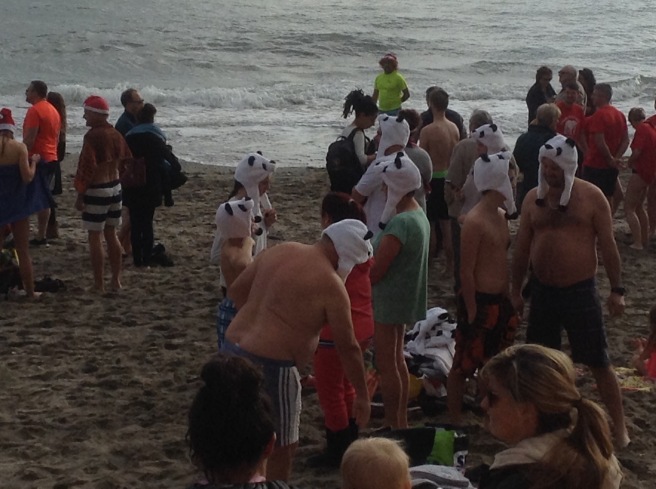 As the time hit noon, the brave souls (me & Littlest included) headed into the sea. It’s amazing how brave you feel when you are part of a large crowd – I would never have considered attempting it alone! I’m even a bit of a wimp in the summertime – those shells and pebbles hurt your feet as you get in and I don’t like the idea of fish nibbling my feet – ugh! 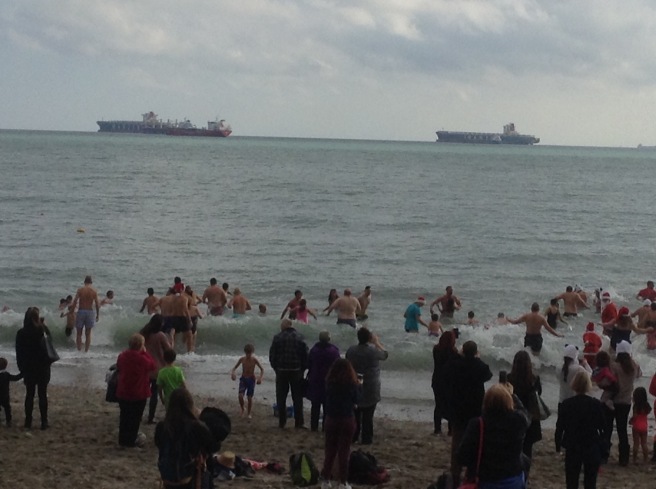 Deeper and deeper until Littlest decided it was too cold and wanted to get out. What a brave little soul he is though – much braver than his big brothers who enjoyed watching us from a safe (dry) distance. 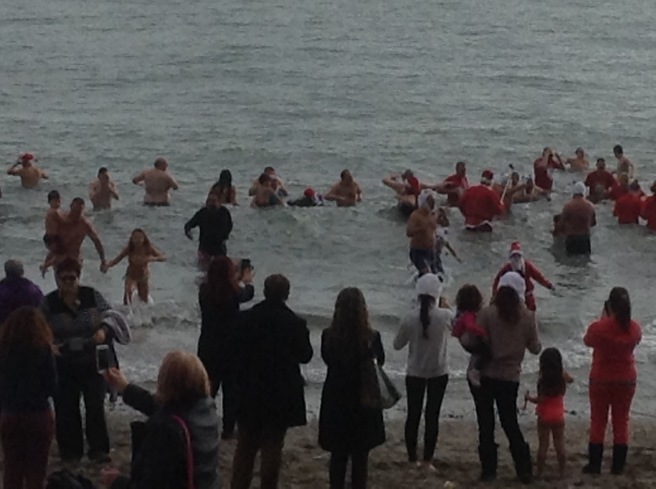 Once safely deposited on the shore with his Grandma I went back in so I’d be able to say I actually went for a ‘swim’ rather than a paddle. It was brief, but it was a swim. Once on the beach and about to reach for my towel, Littlest decided it hadn’t been that cold after all so we had to go back in again for a final dip.

So there you have it, my previous hardy swimming claim to fame was that I went for a dip in an outdoor pool in Cheshire (in North West England) on Halloween. I’m not sure whether the Mediterranean Sea on an overcast Boxing Day was warmer or colder but I’m pretty sure that on childhood holidays on the West Coast of Scotland or North Wales I’ve experienced icier waves!

I’m really glad a did it, perhaps it will become a Postcard family Boxing Day tradition… I’ve got twelve months to work on the rest of them 😉.