Hello there, I’ve not taken you out for a stroll for a few weeks, so I thought it was high time we went for another explore around the place I call home. A few weeks back, my parents came over for a visit and we took the opportunity to do a few of the touristy things in Gibraltar which we haven’t done for a while.

When we first arrived in Gibraltar, we used to frequently take a trip up in the cable car to the top of the Rock and take a leisurely walk down the roads on a Sunday afternoon. When we were suffering from homesickness it felt almost like we were in the English countryside on a summer’s day (well if you don’t look too closely at the olive trees and other Mediterranean vegetation!).

We hadn’t done that for a while so one weekend day during their visit, the whole Postcard family accompanied by the Grandparents bought our tickets for the cable car and went for a ride.

I took this photo of a poster at the cable car base station. Not the best map I’m afraid and there’s a nice bit of product placement on the modes of transport but it gives those of you unfamiliar with Gibraltar a clearer idea of where we went.

To the right of the centre of the picture is the label Alameda Gardens that was the subject of my Stroll around Gibraltar No 7 and is right next to the cable car base station. Follow the line (or cables) from there up to the Upper Rock and that’s the destination for the cable car.

The photo above shows the main entrance to the Alameda Gardens as the cable car begins its ascent up to the top of the Rock. I’m afraid I didn’t get the chance to take too many pictures as it was rather busy and we were packed in a bit!

It also just takes about six minutes to rise from the base station to the summit, during that time it’s very easy to get transfixed by the view, trying to spot out familiar sights, schools, houses and parks which we visit regularly. 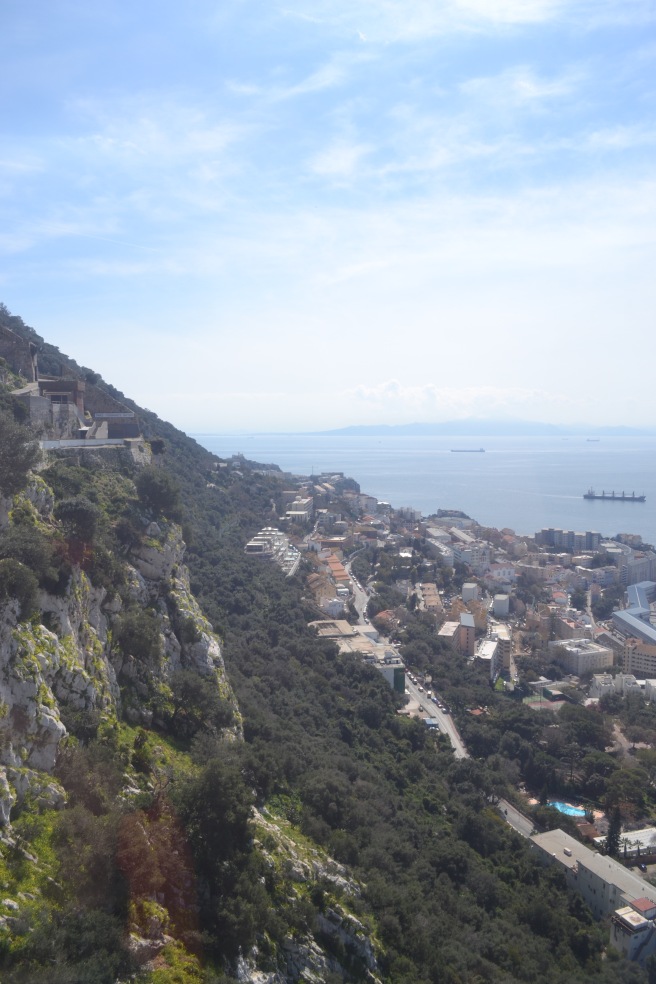 It was such a lovely day and we had a slightly hazy view of Morocco across the Straits of Gibraltar ahead.

And then we arrived!

Of course there’s no show without punch, and naturally the moment you step off the cable car, the apes are waiting to pounce and one did. A tourist on our trip up carrying a plastic bag full of food got off behind us. An ape used our eldest’s head as a springboard to grab the bag. It was all over in seconds and so quick I didn’t even see it despite being about a metre away!

There are many signs warning you not to take food up to the top, and to keep your bags closed and not to feed the apes etc etc, but of course there are always a few people who don’t bother taking notice and then get a fright when their sandwiches or sweets get pinched!

It’s well worth taking your chances with the apes though, because check out the view! This is looking north, to the left of the Rock you can see the Gibraltar airport runway and beyond that is La Linea de la Concepción the nearest Spainish town to us.

I can’t make my mind up whether Gibraltar looks smaller or bigger than it feels from up here, a bit smaller I suppose because it’s all so tightly packed. Down below us here in this picture is the town centre with M&S, British Home Stores and all the delights Main Street has to offer. Also Commonwealth Park, Morrisons supermarket, St Bernard’s Hospital, several schools and housing for thousands, not to mention the cruise ship terminal, a new marina for dozens  of small boats and offices for countless businesses.

Beyond Gibraltar in this picture shows Campamento (which lies beyond La Linea) and the delightful oil refinery at the head of the Bay of Gibraltar.

The apes are clearly unimpressed with the view – they get to see it every day after all. A bit of mutual grooming and flea picking is far more preferable!

Down on the eastern and less densely populated side of the Rock you can find Catalan Bay (home to a fishing village and the Caleta Hotel) in the picture  above, and Sandy Bay, home to a retirement village and a few holiday homes, in the one  below. 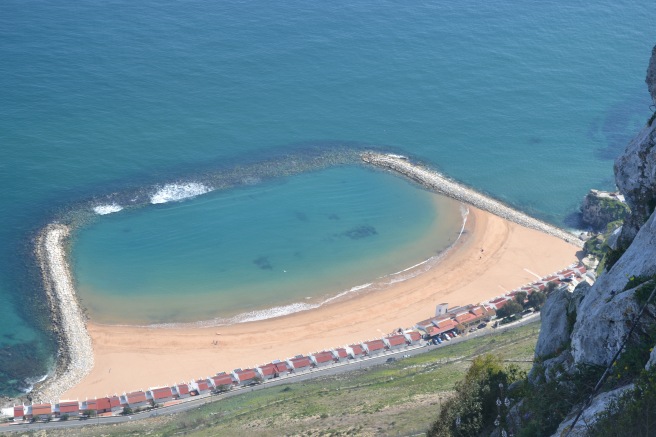 After taking in the views and admiring our home from above, we decided to begin the leisurely walk down the hill  and homeward bound. In order to get down though, you have to walk through one of the official ape feeding stations where they get their fruit and veg 5-a-day from the conservation workers who look after them and keep them healthy.

For obvious reasons this is a big hot spot for tourists and we had to negotiate quite a few taxis and tourists stopping to take photos, so I thought it would be rude not to pap a few of the performers myself.

It’s so much easier walking downwards than climbing up! 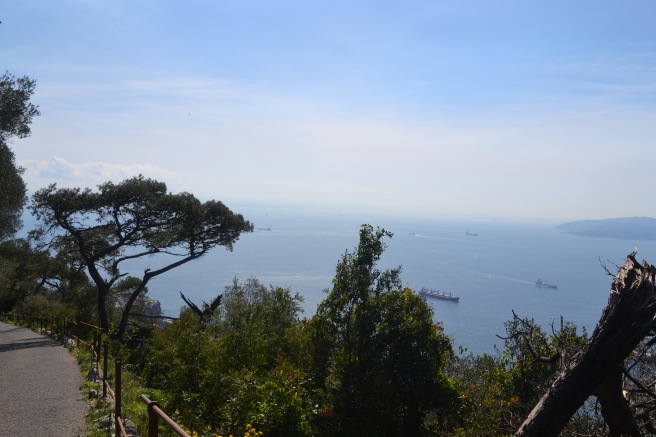 We were really lucky to have a lovely warm day for our ramble down the Rock, almost like a British summer’s day. This really is my favourite time of year in Gibraltar, not too hot and not too wet!

Despite there being a fair few other visitors to the Upper Rock that day, it didn’t take us long to have the meandering roads down to town to ourselves, it was so peaceful. 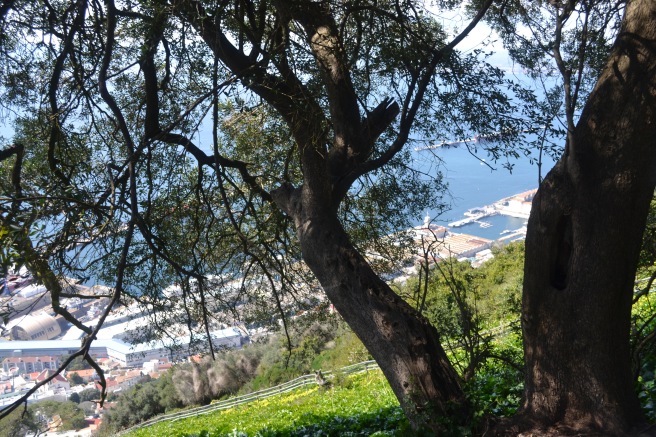 This little chap was making the most of the sunny weather and was doing a bit of sunbathing on a rock as we passed. I have seen quite a few lizards (or geckos – I’m not entirely sure what their correct title is) so far this spring, it’s so nice to see them out and about, scuttling away into the undergrowth or into cracks as soon as they sense they are no longer alone!

There was a fair bit of flora on show as well as fauna, these strongly perfumed wild freesias were in abundance and have been for weeks now, although they are less common in the last week or so, there were also some beautifully scented lavenders in flower too. 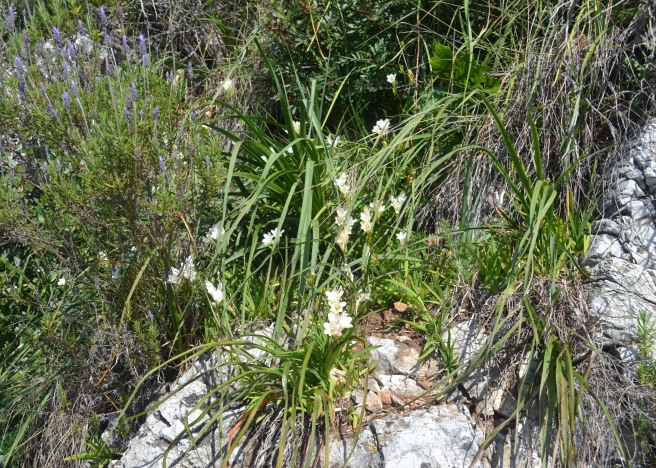 And finally, do you remember this picture from my Stroll around Gibraltar No 6: from sea to summit (in the rain!)… 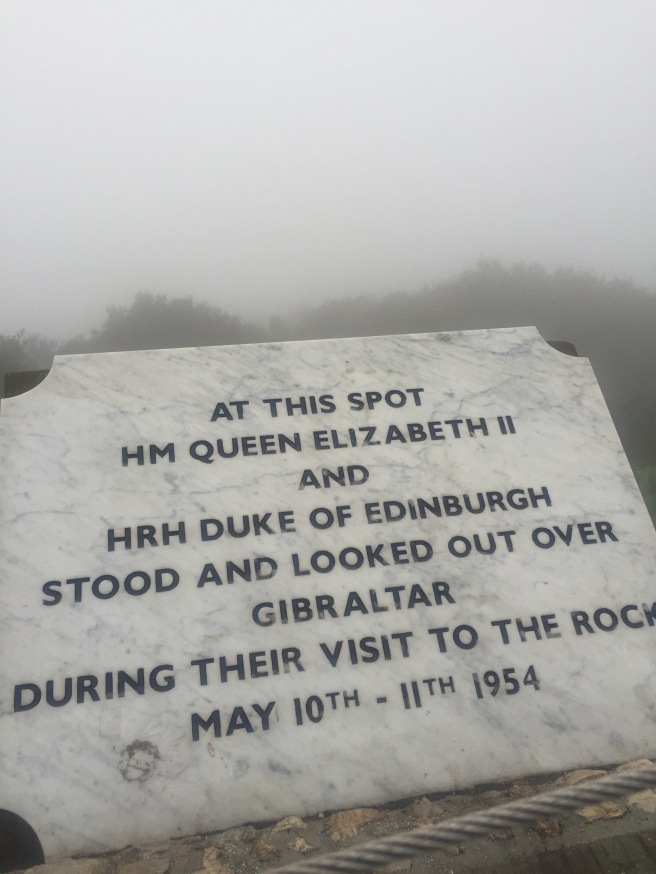 …well, it was a much clearer day when we took our trip up the cable car – just look at the view now!!

Thank you so much for joining us on this stroll down the Rock, do pop back again soon!

25 thoughts on “A stroll around Gibraltar No 9: A trip on the cable car ”

Today’s prompt for #amigurumay2022 is ‘try something new’ so here’s a new thing for me …. a little video for