We awoke on Monday morning to hear that there had been an earthquake in the Straits of Gibraltar in the early hours of the morning. It turned out that there were several in actual fact (last I heard there had been 160 aftershocks!). Despite being up several times in the night to tend to a poorly 4 year old the whole drama passed me and the rest of the Postcard household by! Friends described their beds shaking and the rush to make sure their kids were moved away from windows, social media in Gib was humming with the excitement of it all, we didn’t notice a thing!!

Last week I crocheted the last row of my Cosy stripe blanket and then began sewing my ends in. On Tuesday I had a few quiet moments out on the balcony and thought I’d begin my border… I looked on the Attic 24 blog for the instructions only to discover that when I’d transcribed the order of the coloured rows into my notebook (way back in 2014 – I’m not a fast worker ;-)!) I’d missed off the last 15 colours – that means another 30, yes 30, rows!!! It’ll be a while before I get to crack on with that border after all!!

One of my Instagram friends @bonnies_little_crafts has set herself the rather grand goal of making and collecting 7000 little crocheted hearts in time for the Yarndale yarn festival in September. Her intention is to give visitors to the festival a heart each as a welcome gift to her home town of Skipton. In previous years I have sent woolly offerings to Lucy at Attic 24 (one of the founders of the festival) for exhibition displays, so although I have failed to attend myself, a little bit of me has made it over to the Yorkshire based festival of woolliness in past years. One day I would love to go, as I have seen all the lovely pictures posted by crafty bloggers who have been already, and it looks amazing. As I have spent a large chunk of this week sitting on the sofa with poorly children I thought I’d hook up a few to send off to Skipton. If you want to have a go at making some little hearts to support the #7000 challenge, look up @bonnies_little_crafts on Instagram for more details. 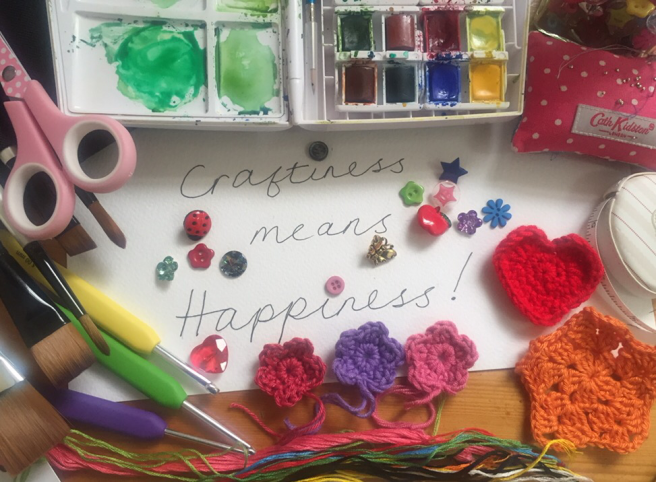 I have really enjoyed taking part in the #30daysofcraftiness photo challenge this month. It has forced me to think a bit more about the photos I take and encouraged me to take photos I wouldn’t ordinarily capture. The photo above is for day 28 and the title is ‘quote’. I didn’t want to just use a Google image of an inspirational quote or cat picture (ref: The Lego Movie) so had a go at making my own. And it’s true – I get grumpy when I haven’t been near a crochet hook or needle or paintbrush for a while, to me crafts truly are my therapy!

On Friday night we had a belter of a thunderstorm. The rain and thunder had been forecast, so it wasn’t a surprise but the intensity and noise was really quite unsettling. Living in an old building with original wooden sash windows which are a little past their best, we almost felt like the roof was coming in on us. The windows and floors were rattling with the noise and the brightness of the lightening was off the scale. Thankfully it was late in the evening so our two youngest were tucked up in bed and oblivious to the storm. As the storm had taken out our TV signal, No 1 son sat up with me colouring. It was a nice way to spend quite a dramatic hour or so!

Calm after the storm 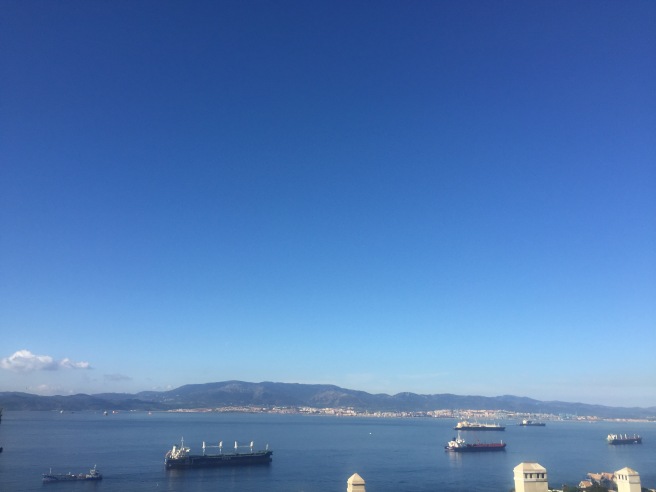 Looking at this, it seems hard to believe that less than 12 hours before the lightening was splitting the sky and the thunder was rattling the chimney pots! What a beautiful way to start the weekend – hello Saturday!

Med Steps in the sunshine!

After 6 days of poorly children, we are all healthy again (touch wood) and I managed to escape to do the Med Steps yesterday afternoon. It was hard work because it had been over a week since my last trip up AND it was warm. The sun made it absolutely glorious though, the butterflies were out, the gorse bushes were flowering and just look at the colour of that sea! I also had a first – I saw a Barbary Partridge for the first time. He was too quick for me to photograph though so you’ll just have to make do with this picture 🙂 .
Sunday Sevens is a weekly blog series which was created by Natalie at Threads & Bobbins.