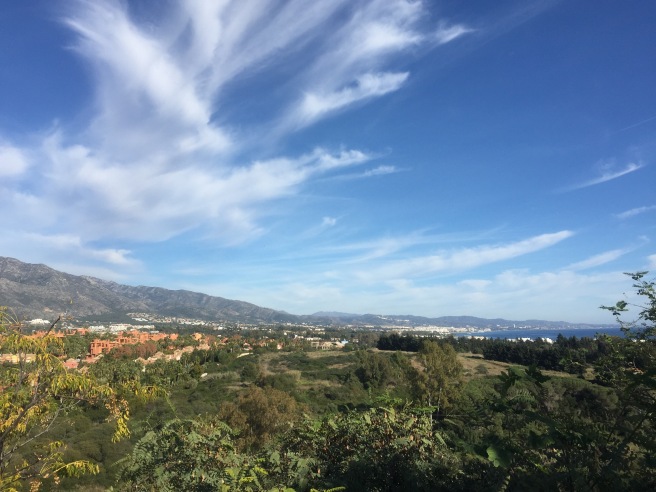 I hope you have had a good start to 2016. We headed a few kilometres along the coast from Gibraltar into Andalusia for New Year. We were blessed with beautiful weather as you can see from the pictures, and it is a really beautiful place. The above photo was taken at Nueva Andalucía on New Year’s Eve.

The two big (and rather obvious) differences between Gibraltar and it’s closest neighbour are space and greenery. When 30,000 people live in such a confined strip of land it can get quite intense sometimes. I do love Gibraltar but having grown up a few miles from rolling countryside and with a front and (small) back garden, I find I need to get away every now and then.

We stayed in an apartment in the hills above the bustling town of Puerto Banús. The seaside town is famous for being a millionaires’ playground with it’s marina full of posh boats and posh cars. Apart from a meal at the Hard Rock Café and a quick look at the shops we stayed away from the razzmatazz though and did our own thing. We woke on New Year’s Day to the most glorious weather and decided to get a bit of fresh air and walk along the coastal path towards Marbella.

We weren’t the only ones who chose to stretch our legs that afternoon. There were people walking, scootering, roller-skating, cycling and Segway-ing along the wide promenade.

I was happy on foot but our two youngest sped off on their scooters to burn off a bit of energy. Their destination was this bridge across the Rio Verde. The summit in the background wearing a cloudy hat is Sierra Blanca.

It’s a great bridge, perfect for scootering. It’s wide and smooth so you can go fast, is made of wooden planks so it makes a great noise as you fly across it and has a great slope to zoom on giving your Mum palpitations as there’s a flight of stairs at the end! 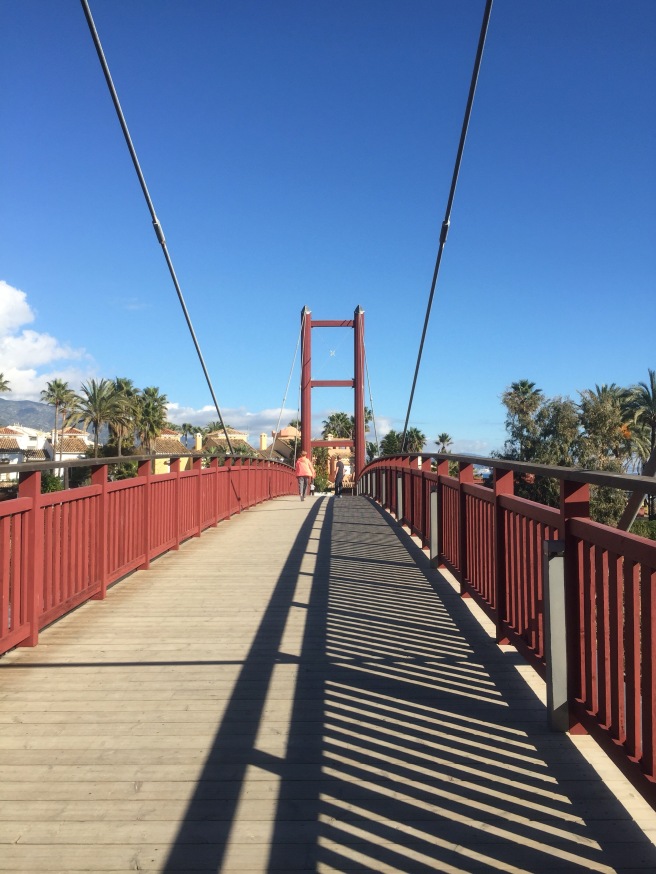 It’s set in great surroundings, the Rio Verde on one side. Where sea birds were enjoying the calm waters. 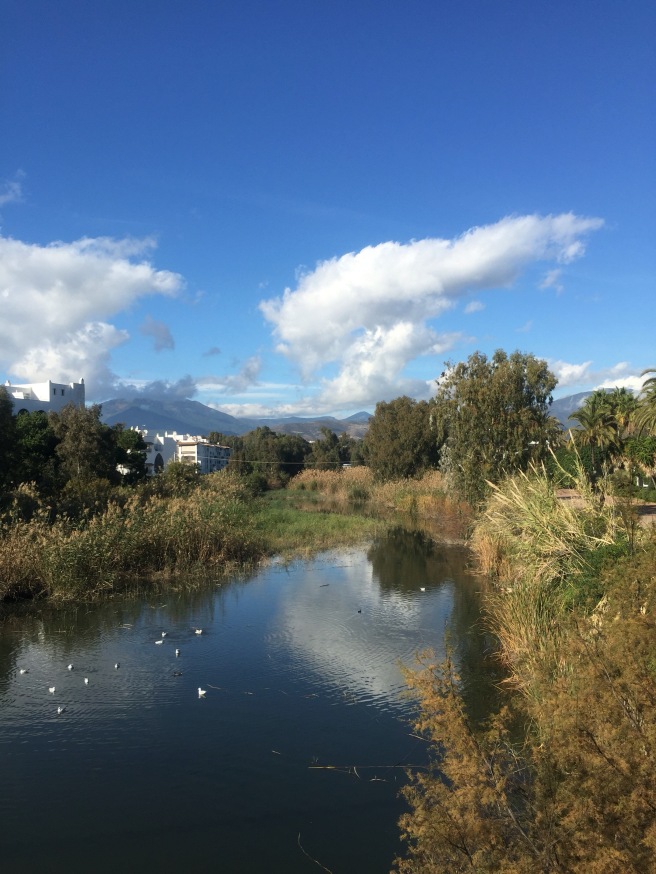 And the sea on the other side. 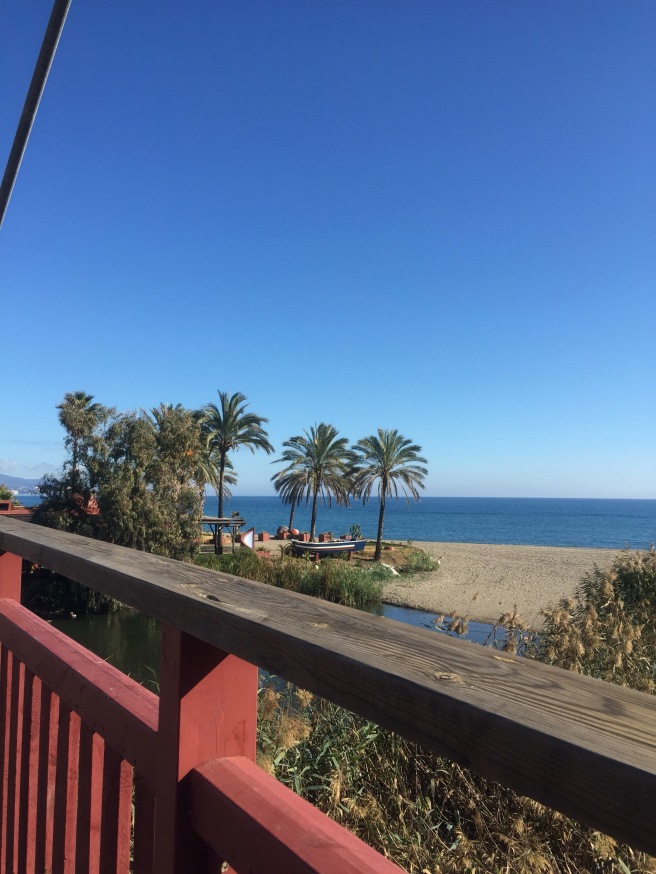 Beyond the river the beach stretches on towards Marbella. Even though it was the first of January there were some people basking in the winter sunshine.

Our walk ended here as hungry children demanded food so we turned around and headed back towards town. We have promised ourselves we will return and walk further next time.

January 2nd brought with it rain and cloud – we were so glad we’d made the effort to have our walk in the sunshine when we did. We explored a market which appears in the streets around here each Saturday. 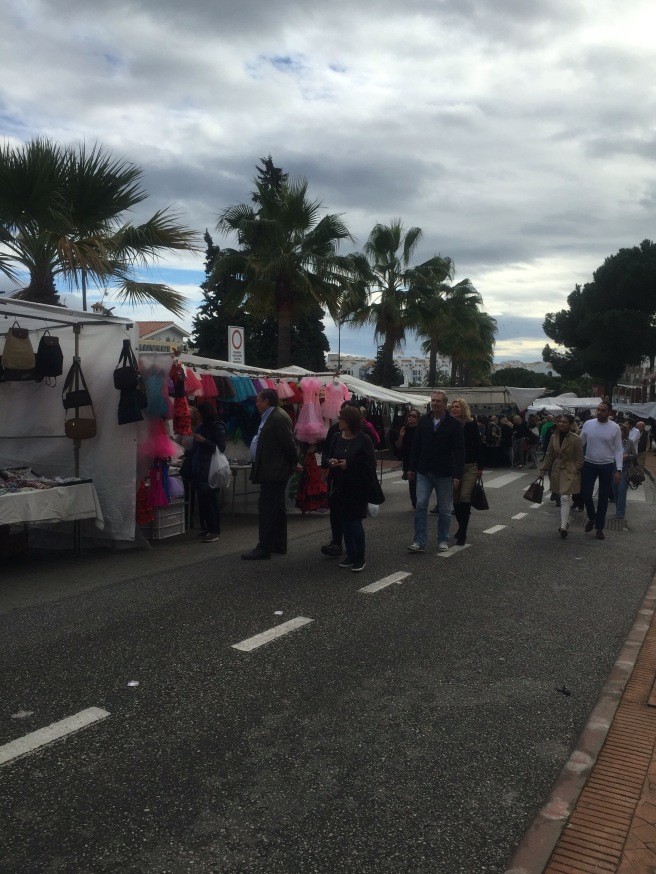 We have managed to get caught up in the market by accident a few times in the past when trying to drive through these roads. This time though, we were on foot and ready for a mooch about. 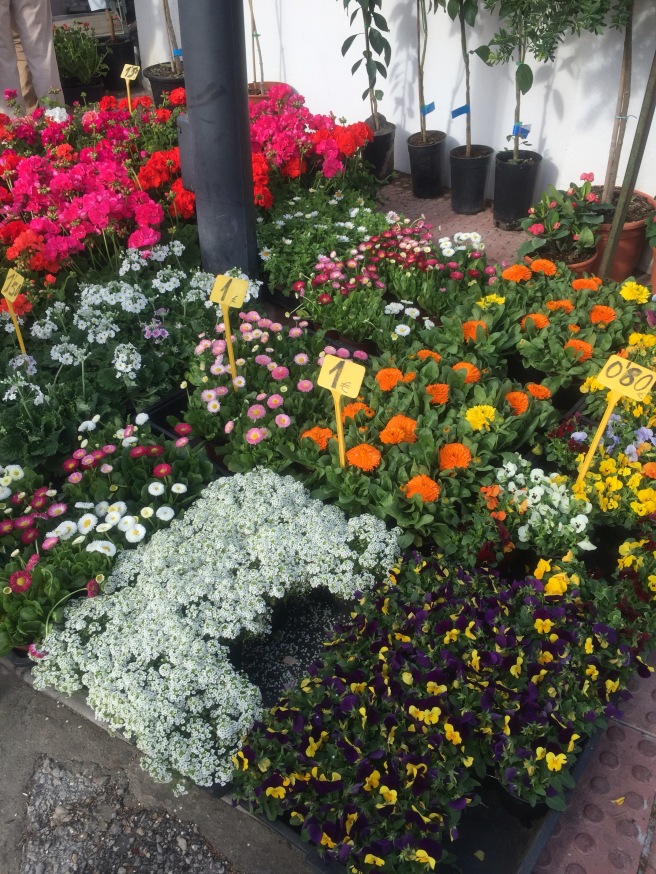 Apart from some nice plant stalls and a few artisan craft stalls in the grounds of the bullring we were a bit disappointed with what was on offer.

There were thousands of fake designer handbags and sunglasses to choose from as well as cheap toys and a few electronics. I’m afraid it wasn’t at all what we had hoped for.

After the anti-climax of the street market we decided to regroup and try an alternative outing so we hopped into the car and headed east along the coast to Benalmádena and the Butterfly Park there.

Standing high on a hill and in the shadow of a stunning Buddhist Temple, we found the Butterfly Park. It didn’t disappoint.

From the moment we arrived we spotted them. Bigger than the palm of your hand and in every colour of the rainbow. I’ll let the photos tell the story here… 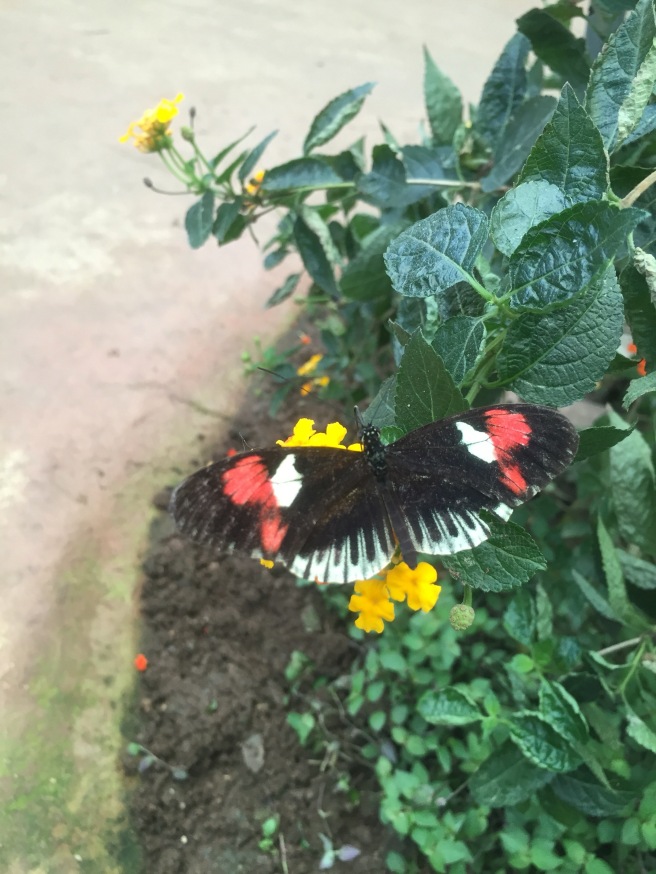 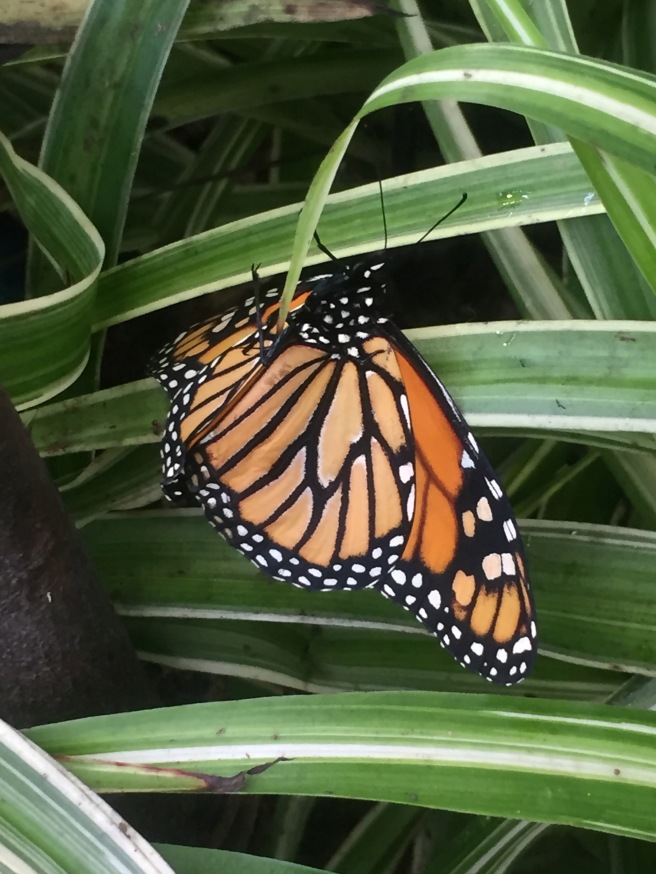 We listened to a talk by a member of staff who told us about the life cycle of the butterflies and moths there and showed us the most amazing array of cocoons and newly hatched butterflies.

Then came the fun part… Firstly our littlest got to feel a cocoon (and it’s metamorphosising inhabitant moving).

Then he got to have a sleeping moth on his hand…

…then we all did. That was a big step for me as,although I love the beauty of these creatures, the idea of having one on my skin was erm not really my cup of tea. But I couldn’t leave being the only one not brave enough to try it – so I did. Yay me!

There were other creatures there too, this big lizard and a wallaby, both of which wander freely about inside with the visitors.

We really enjoyed our trip and would recommend it, although for a family of five it cost €42 so it wasn’t cheap. It was a lovely tranquil place.

Once our visit was over we couldn’t help but go across the road to admire the amazing view west over Fuengirola.

Today we packed up and headed home, we were given a pretty send off with a rainbow by the side of the motorway.

And we were soon home… Ah there she is! Our lovely Rock.

Until next time, thanks for stopping by 😊. Thanks also for all the likes and lovely comments, it’s great to hear from you.

6 thoughts on “New Year in Andalusia”