The Gibraltar Garrison Library is an impressive colonial building in the centre of town opposite the Elliott Hotel. It’s a building I pass almost daily during the week and one I have been meaning to pay a visit to for years but just hadn’t got round to it. The Gibraltar Literary Festival begins tomorrow and the place to get tickets is here (if you don’t take the online option), so a couple of weeks back when I ventured in to make my ticket purchases it reminded me of my intention to visit it properly. So while my parents were over, before the midterm holiday, a tour around the Garrison Library was a lovely way to spend a morning. 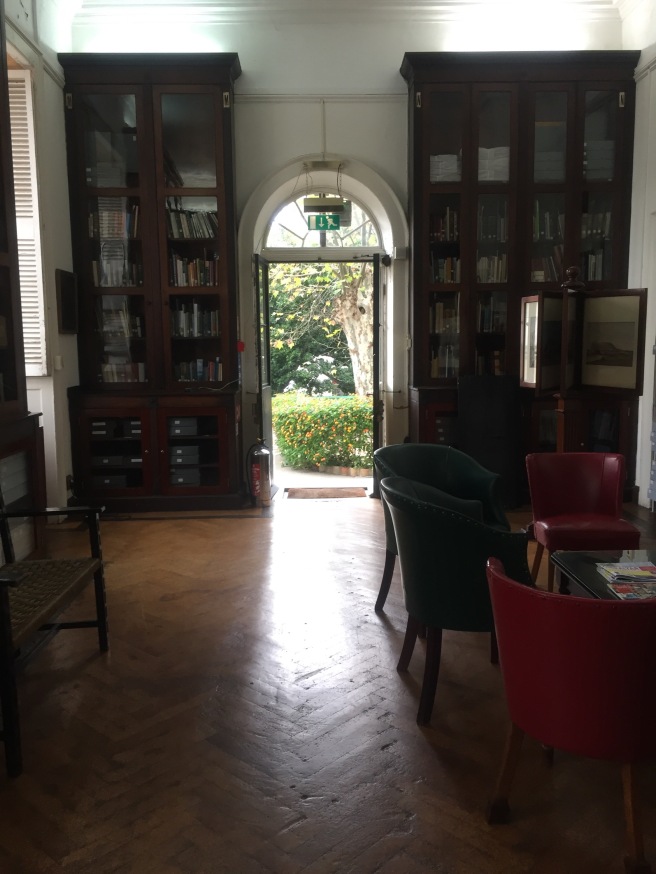 The tour began in the ‘Gibraltar Room’ (above) which, as the name suggests, holds all the books pertaining to Gibraltar. 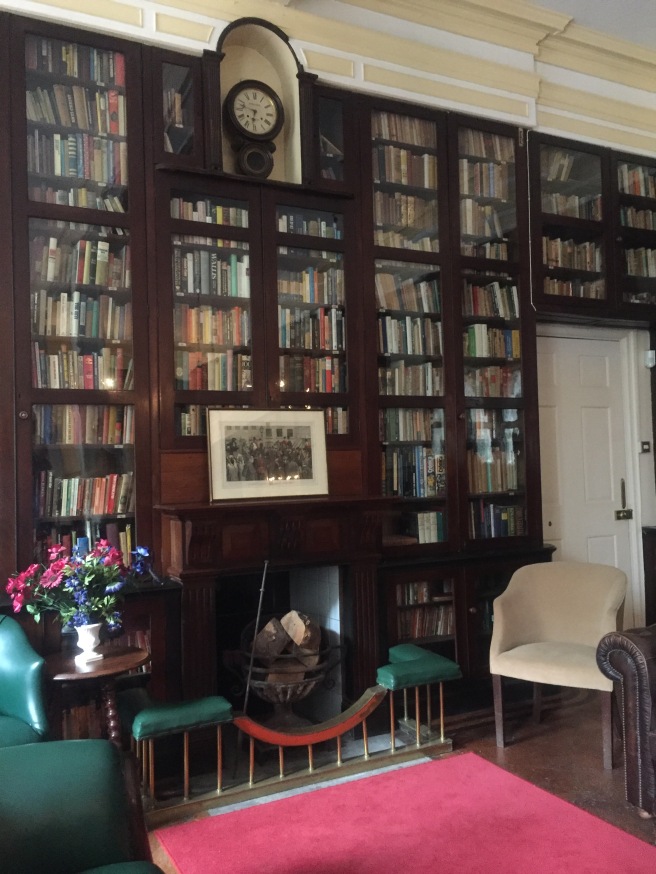 The Garrison Library is a beautiful building (as the photos illustrate) and steeped in history. It was founded in 1793 by Colonel Drinkwater after the Great Siege of Gibraltar. During  the siege it became obvious to him that there was a dearth of decent reading material. So in an attempt to keep officers attentions away from the unseemly pursuits of women and drink, the library was established.

Reading rooms were initially set up at a different location and work began on the construction of the current building in 1800. The materials used were locally sourced, exceptionally strong cork oak flooring was used which looks as good today as when it was laid and the fireplaces were designed to burn coke which could be found in the Campo area across the border in Spain.

Some books were purchased when the library first opened but most of the collection of up to 50,000 volumes and artifacts were gifted to the library by officers from their own private collections as they headed home or onto their next posting. A considerable section though, was ‘acquired’ by the navy when they seized ships and passed on any books found onboard. For this reason there is a sizable Napoleonic Collection (all in French) taken from French ships.

These photos show the edition of the Gibraltar Chronicle (our local newspaper) reporting on  the Battle of Trafalgar and, as you can see (on the right hand side of the photos) shows the article in both English and French as the editor of the Chronicle was a Frenchman. 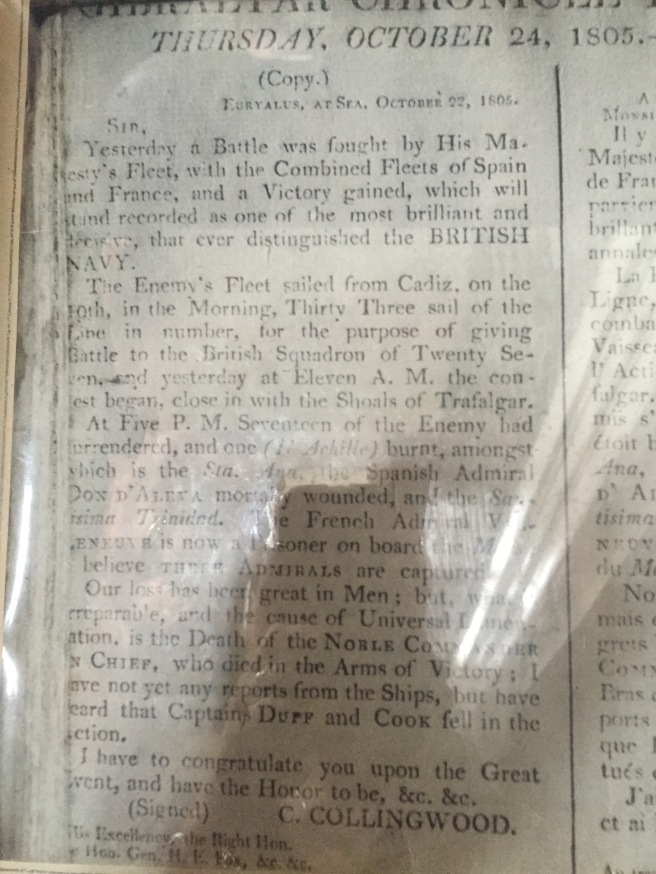 This impressive staircase leads upstairs to the upper reading room, which is now used for public events like Government press conferences and lectures by visiting academics. The portrait in this room is of Colonel Drinkwater the founder of the library.

Among the many volumes on its shelves are first editions of novels, major works of science and religion of the time and even Ghengis Khan’s Autobiography! There is every edition of the Gibraltar Chronicle since 1800 to the present day. Some of the books, due to their age, are in a pretty fragile condition. The library relies on a team of volunteers to support the staff in the care and recording of the books. 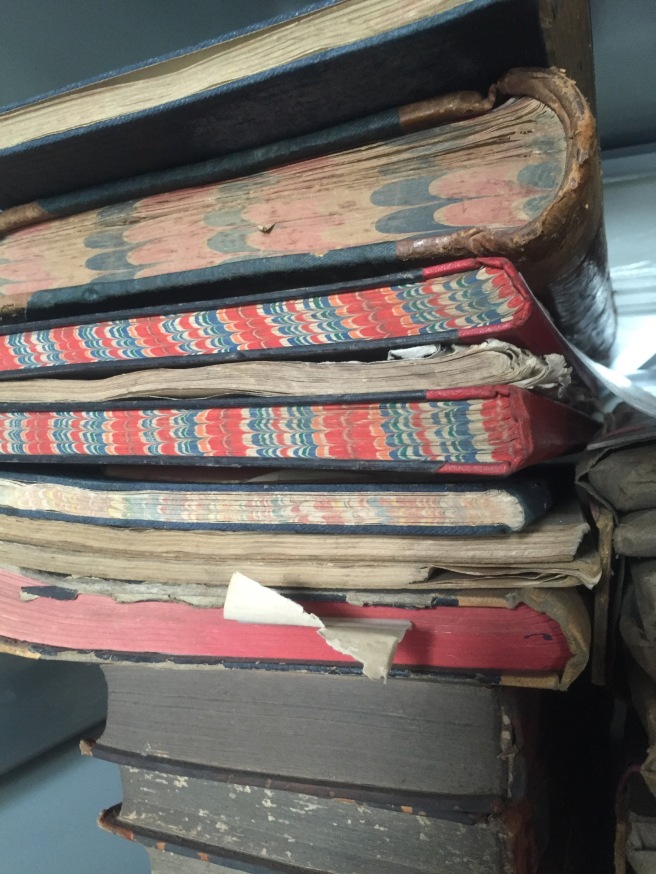 Also on the top floor of the building is a ballroom (a strange room to find in a library don’t you think?). The rules governing the library meant that only men were allowed in, so in order to get around this, and allow ladies to join the officers when they held balls and parties in the ballroom, they built a special stair and rear balcony so that the female guests could join, them avoiding the main entrance and staircase. 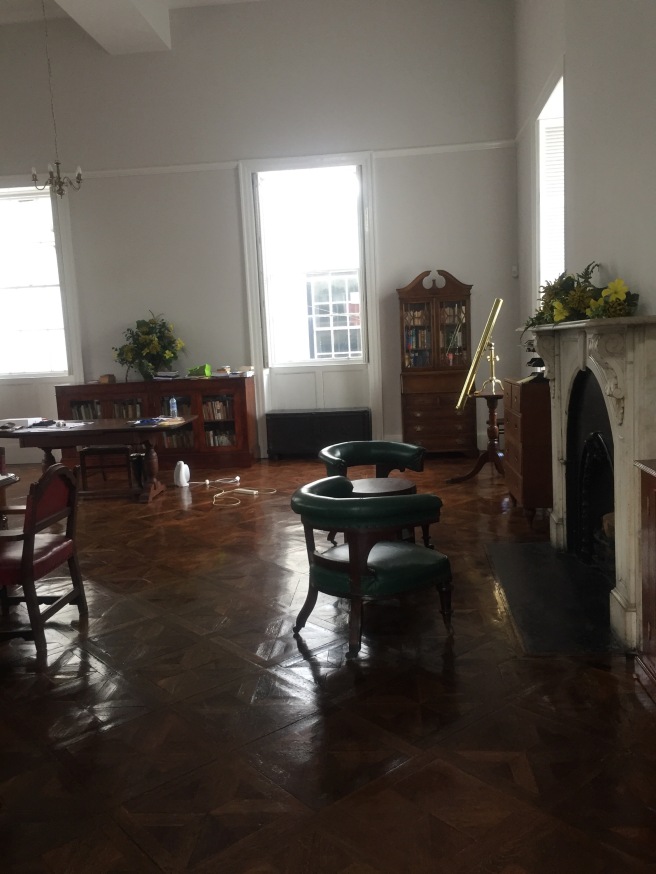 I’m not sure how easy it would have been to negotiate that metal spiral staircase in a big ballgown and dainty shoes, it was clearly designed by a man!

A telescope sits before a window at the front of the ballroom so that officers could keep an eye out at sea and make sure no funny business was going on in the bay while they were enjoying their R&R. It’s hard to imagine there used to be a sea view from the window as today the development of the town and harbour area (not to mention the trees) rather obscure any view of the sea from here today.

The flooring up here in the ballroom is particularly beautiful, especially in the window recesses and door thresholds. 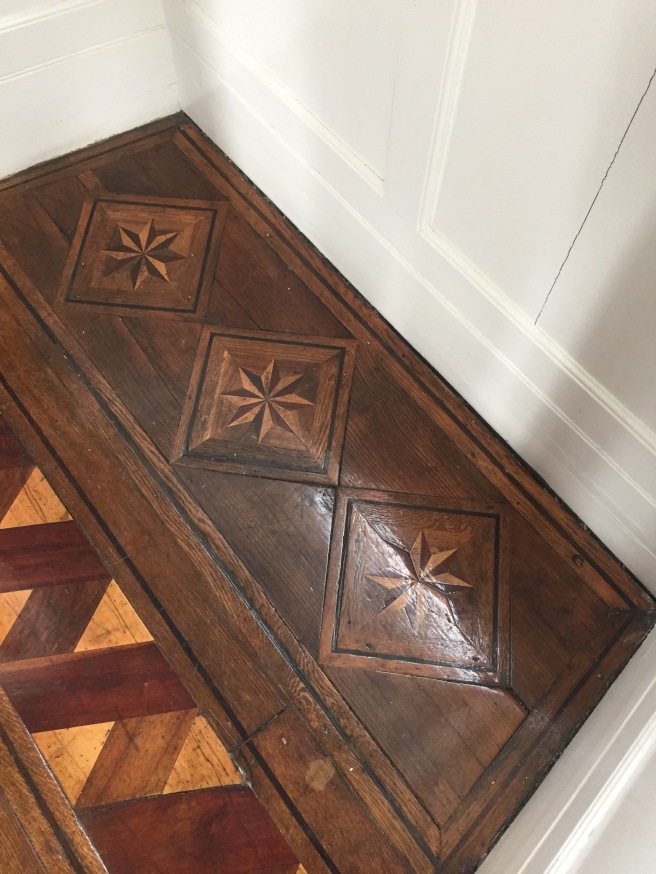 To the rear of the library lies a tranquil garden.

It would be a lovely peaceful place to just come and sit. Unfortunately for us it was a little damp on the day we visited so it wasn’t quite the weather for such lazing about, but hopefully I’ll get the chance to take advantage of the garden at some point in the future. 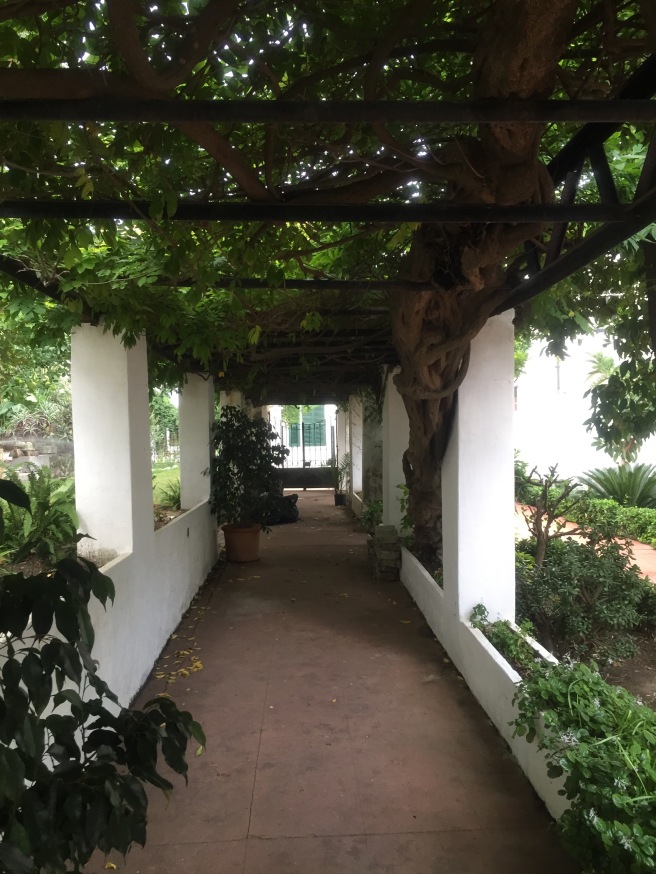 If you ever find yourself in these parts I would highly recommend a visit to the Garrison Library, the guided tours are free and begin at 11am each Friday.