On Saturday we got up early and set off on a road trip. That’s something VERY unusual for us these days. When we lived in England we had regular trips up to the Scottish Highlands (which we love) and across England to visit friends & family. Since moving to Gibraltar almost 6 years ago though, the longest road trip we’ve taken as a family is around 2 hours up the road to Cadiz. When we planned the trip, we did it thinking ‘what the heck, nothing ventured, nothing gained’ (I shall preface this statement with the fact that 5-10 minute car journeys with my family are rarely quiet, event-free occurrences). Even the prospect of sitting in a border queue to go 5 minutes up the road to Decathlon for some school PE trainers is a big deal for us.

Over the years, we have become very Gibraltar-centric. The prospect of a long and arduous wait in a border queue across to Spain and back home again with our offspring in the back of the car doesn’t fill either of us with joy. As a consequence, we rarely venture over to Spain without a good reason like a party, to take visiting relatives over or to go on holiday. We have had a number of quick half-term breaks on the Costa del Sol since we arrived here (around an hour’s drive from home), and we have looked longingly at friends’ Facebook photos of skiing trips to Sierra Nevada and sunny get-always to the Algarve but we’re never brave enough to attempt it. That was until now.

This year we decided it was time to bite the bullet and head off further afield. Armed with a packed lunch, wet wipes and a couple of movies downloaded onto the iPad we set off. An early start paid dividends as we sailed through the border with Spain. So taken aback was I at the lack of a queue I almost flashed our passports at the man selling Gibraltar Chronicles just before we crossed over! (Not my proudest moment and it didn’t go unnoticed nor without comment from Mr P). We zoomed past our favourite retail outlets at Los Barrios and out into the beautiful Andalusian countryside. 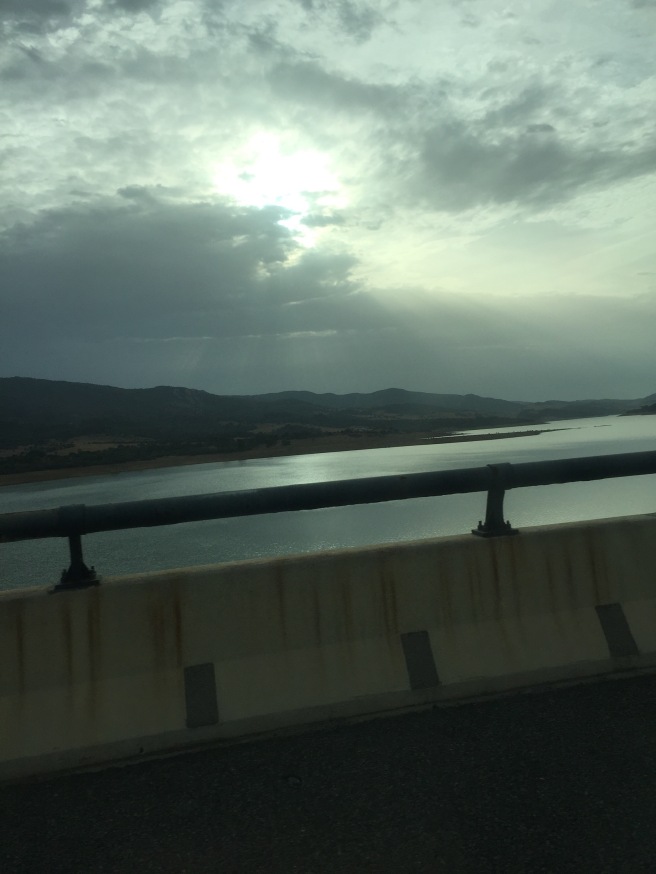 As you will notice from the photo, it was a bit cloudy and not at all Andalusian-like in the weather stakes but it didn’t matter. The roads were quiet, the only hold ups being a caravan with a puncture and a toll booth near Jerez where, as you can see, it got rather wet.

WET??? In southern Spain IN AUGUST??? It was more like driving on the A1 (in England) than the E5 heading towards Seville!

Having listened to friends talk of downloading movies to iPad to entertain children on long car journeys, I thought that may be the solution to potential boredom problems. As a childhood sufferer of car sickness, I should have known better. We held off on the movie for at least half an hour while we could still get good reception of BFBS Radio 2 and the BBC Radio 4 news from the mast in Gibraltar. When the crackle became unbearable it was time for the big treat; ‘Paddington’. Two out of three of the boys had not previously seen the film so I thought it was a perfect choice. It was, for about 20 minutes until the first cry of “I’ve got a tummy ache!”. We lasted another 10 minutes before a second child complained of feeling queasy. That’s when the iPad went away – permanently. How could I not have realised there would have been a problem with watching a film in a moving car? I certainly couldn’t do it even now. A plane or train is one thing (well alright 2 things), but a car? Hey-ho, I won’t attempt that again!

In just under 2 hours we were further from home than we have ever been before as a motoring family of 5. We crossed the impressive road bridge over the Guadalquivir River at Seville  (or Sevilla as it’s called in these parts).

At Seville, we turned left off the motorway which required crossing 3 lanes of traffic to sit in the fast lane (a bit hairy at times) and wait for the turn off to Huelva and…

… the first road sign for Portugal! On we drove, (stopping only for an emergency toilet break), and just 3 1/2 hours after setting off we saw this wondrous sight: 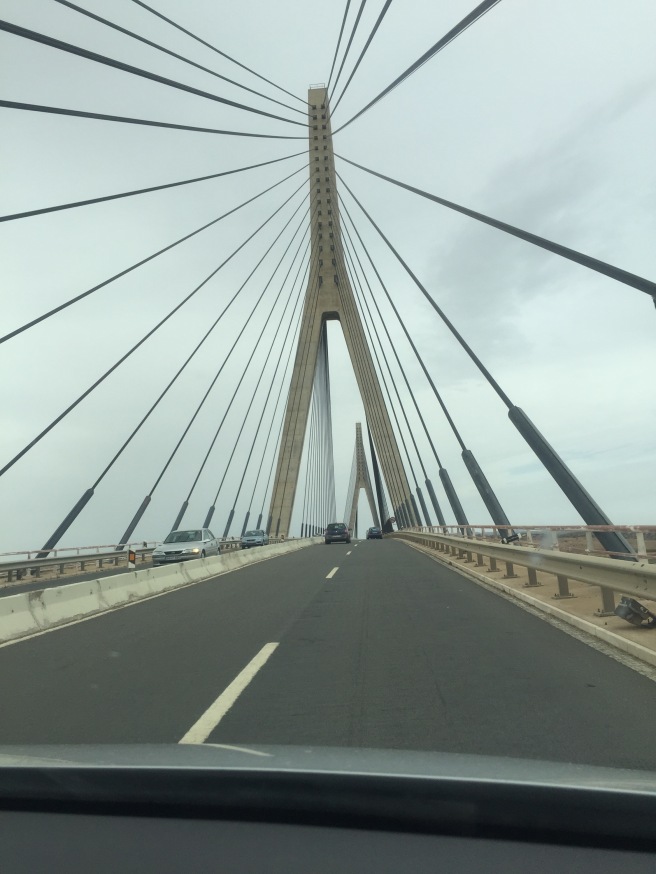 … the bridge over the Guadiano river marking the border between Spain and Portugal. It seems a bizarre thing to say but you could tell you were in a different country immediately (apart from the language on the road signs!) the vegetation at the side of the road was different and the farms, etc seemed to be on a much smaller scale than the more industrialised developments we’d left behind. Just over an hour later, we were at our destination close to the fishing town of Portimão. 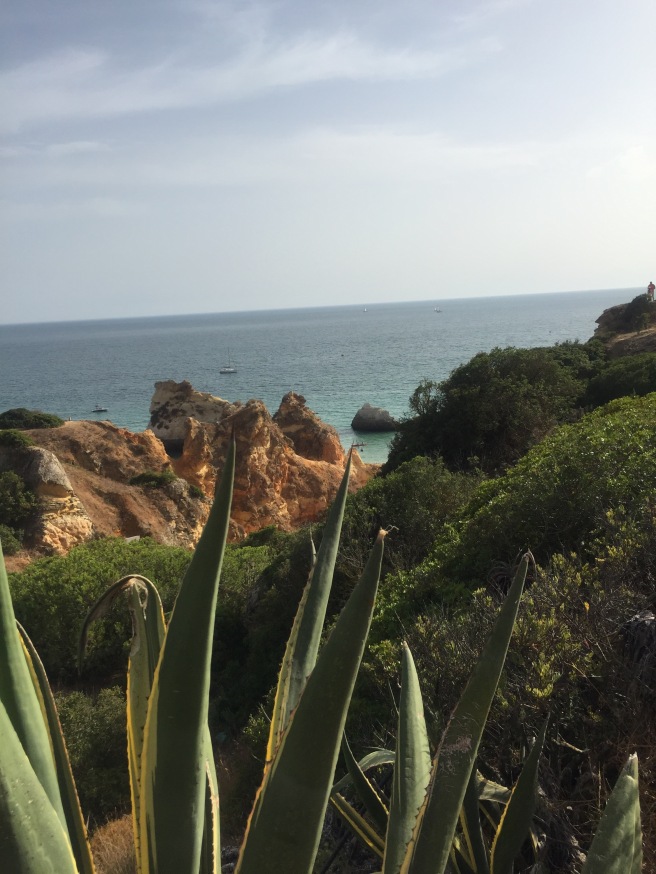 I’m amazed at how relatively painless the journey was, I don’t think we were asked “are we there yet?” until we were close to Seville, which to my mind is pretty good going. Mind you, we must have been asked it close to 100 times between Seville and Portimão but hey, who’s counting? In the process of undertaking the journey, we exorcised our fear of driving relatively long distances with 3 kids in the car and were rewarded with blue skies and sunshine at the end of the day. Oh, and a fantastic view of the Atlantic Ocean!

É tudo por agora (that’s all for now) from the Algarve, thanks for stopping by! Please call back soon and I’ll be sharing some of our Portuguese experiences. 🙂

One thought on ““Are we there yet?” Road trip to Portugal.”