In just five days time I’m going on holiday. I’m so excited to be heading back to England to see my family and friends back at ‘home’. However, I have such A LOT TO DO before then, and I don’t just mean packing! There’s Mr Postcard’s birthday, an early birthday party for Mini Postcard as his big day’s when we’re in England, a nursery graduation, beach days with school, pyjama day at school, a night out with Mr P and a sad goodbye to a friend, who’s leaving Gibraltar for good. Wow – that’s quite a busy schedule – not sure when I’ll find the time to get packed!!

Fortunately, before our hectic time ahead we’ve had a great few days here. There have been several trips to the community pool to cool down and even a trip to a water park over the border in Algeciras, what a treat that was for the kids. Not sure I’ll be hopping onto an oversized tyre and throwing myself down a curly wurly chute again in a hurry though! I still feel dizzy thinking about it! 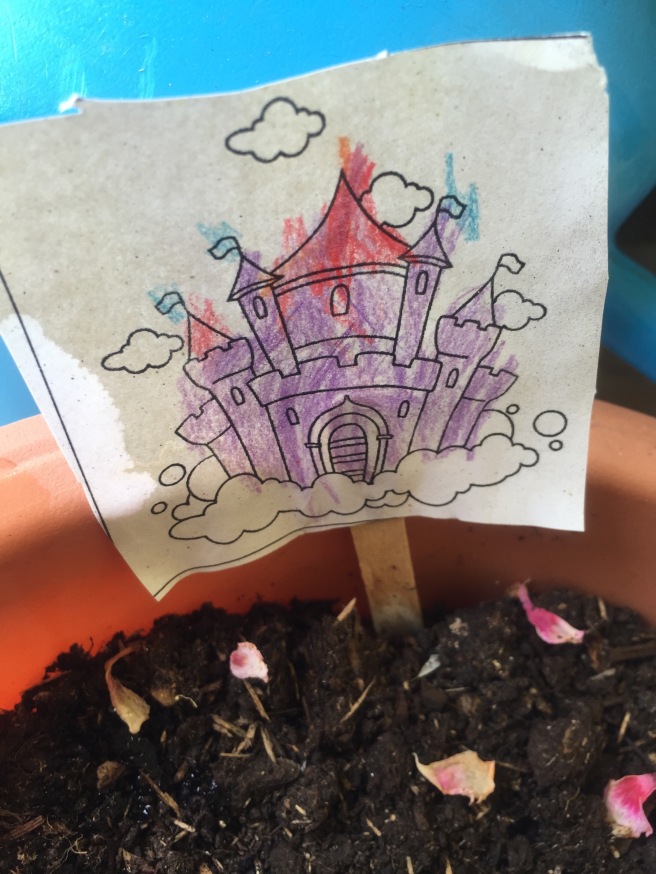 Several weeks ago Mini Postcard came home from his school nursery with a beanstalk in a plastic cup complete with a beautifully coloured giant’s castle. They have spent much of the term studying Nursery Rhymes.

Over the ensuing weeks, he’s taken great care to keep it watered and it’s repaid his hard work with some flowers!

It’s now Mr Postcard’s job to keep it going while me & the kids are away in Blighty – no pressure then Daddy! Will we get a crop of giant’s beans do you think?

Last night we decided to head out for dinner as a family for a treat, as it’s our last Saturday night together for a few weeks. After our meal we took a scenic walk home through the Alameda Botanical Gardens, and stumbled upon the start of the Miss Gibraltar 2015 beauty pageant. The crowds were gathering in the Open air theatre waiting for the show to start. We tried to sneak a peak but just saw some oversized glitter balls!

We watched most of the show when we got home on GBC TV, the local TV channel. The glitter balls revolved later on to reveal the contestants! The outgoing Miss Gibraltar 2014 was actually one of my children’s former teachers, so we had an interest in seeing who would replace her and compete for the Miss World title.

I have to say, prior to living here I had a rather low opinion of beauty pageants, but I fear I’ve been caught up in the excitement over the years. After all, shortly after we arrived, Kaiane Aldorino won the Miss World contest for Gibraltar. The excitement and pride in Gibraltar at the time was incredible. As the result was announced, fireworks went off, the nearby City Fire Station let off it’s sirens and car drivers hooted their horns into the small hours of the morning. It was a real coup for Gibraltar on the world stage and Kaiane was a great ambassador. Good luck to Hannah Bado, who won the Miss Gibraltar 2015 title last night.

Our walk home through the Alameda Gardens coincided with a beautiful sunset.

Well, that’s all from me for now, I hope you’ve had a good weekend. A big thank you to those of you who have liked my posts and are following my blog, it’s lovely to know there’s someone out there actually reading my ramblings! Goodbye for now!