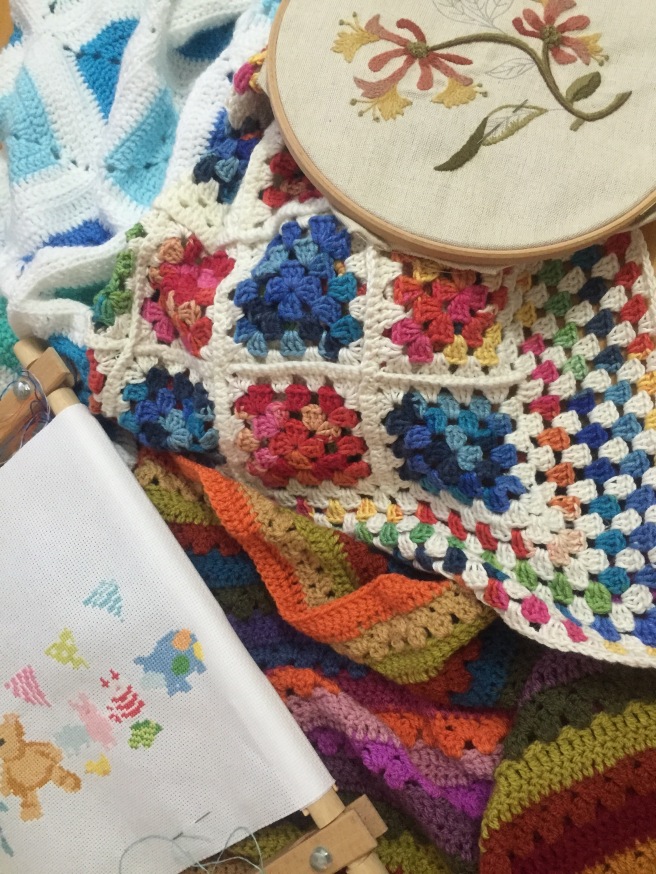 I have a confession to make. I have a bit of a WIP mountain thing going on. I’m really very good at starting new crafty projects when the creative mood takes me. I’m just not that fantastic at finishing them and my pile of ‘Works In Progress’ is rather large. There are a few others which didn’t make the above picture including a pirate themed quilt top which I started for Child No 2 several years ago – I’ll be lucky if it gets finished before Child No 3 grows out of his pirate penchant. Perhaps it’ll be ready in time for grandchildren?!

Usually my WIPs don’t have a deadline but one of them does. The blue and white blanket at the top of the picture – it’s a baby pram blanket for a special young man who’s due to put in an appearance any day now. In fact, he was due to make an appearance six days ago, but so far he’s happy to stay where he is. Anyway, for once I have decided it’s time  to pull my finger out and get cracking with it.

So I have been unashamedly crocheting in public, on a park bench, at the hairdressers, by the pool, on the balcony, in fact when ever I get a spare moment and I am finally on the home straight! It’s looking like I might achieve my deadline.

Well I’m pleased to say that after a concerted effort this evening…… it’s finished!!!

Now, which WIP should I target next I wonder? Until next time, thanks for reading!